Singer R Kelly has faced allegations of sexual abuse for a long time. In the end, his obsession with messages exchanged with the victims came in handy for the police. The law has finally caught up with him.

R Kelly has been convicted of leading a decades-long sex crime ring, with a New York jury finding the superstar singer guilty on all nine charges, including the most serious of racketeering.

R Kelly’s conviction marked a stunning fall for a man who was once one of the biggest names in R&B music. It came after the first Me Too-era trial in which most of the victims were Black women. R Kelly was found guilty of recruiting women and teenagers for sex, before grooming and brutally abusing them. 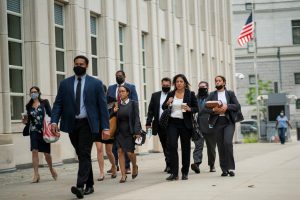 Much of the evidence that prosecutors used to convict R. Kelly came from the singer himself. He obsessively collected message slips and letters written by the women he interacted with — some of them underage — according to Ryan Chabot, the lead federal investigator in the case. Chabot said he sifted through the evidence recovered from several searches of the singer’s Chicago apartment and storage facility.

But the verdict has also prompted an obvious question: Women have said that the singer’s abuses began as early as the start of the 1990s.

Why did it take three decades for the singer to receive criminal punishment?

The entertainer had a network of enablers around him. He followed the simple strategy of ‘buy or blackmail’.

The government claims “settlement factory” that is offering evidence of Kelly’s payments to women who made accusations in exchange for their silence.

Kelly “used his henchmen to lodge threats and exact revenge,” blackmailing women with nude photographs of themselves, one prosecutor, Elizabeth Geddes, said in closing arguments.

Federal prosecutors also accused Kelly of paying witnesses to not cooperate with the authorities in the lead-up to his 2008 trial and acquittal. They said the singer let some witnesses know they could be “subject to physical harm” if they proceeded.

“Our reality is that our society just does not view Black women and girls as credible,” said Kenyette Barnes, a co-founder of the #MuteRKelly campaign. “We assume that 15-year-old Black girls have the cognitive ability to manipulate a grown man.”