Sidharth Shukla had a wonderful journey during his time in the Entertainment field and had become a household name for his brilliant on-screen versatility with shows like Balika Vadhu. The actor was also the winner of the most controversial yet loved reality show Bigg Boss 13 and was at the peak of his career. The nation is still in dilemma and trying to cope with this untimely loss.

This, more than wanted media attention, has affected Sid’s family and finally the family has released an official statement requesting for privacy while thanking his fans for their prayers and well wishes that they’ve sent. 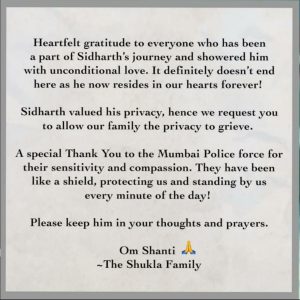 The letter says, “Heartfelt gratitude to everyone who has been a part of Sidharth’s journey and showered him with unconditional love. It definitely doesn’t end here as he now resides in our hearts forever! Sidharth valued his privacy, hence we request you to allow our family the privacy to grieve. A special Thank You to the Mumbai Police force for their sensitivity and compassion. They have been like a shield, protecting us and standing by us every minute of the day! Please keep him in your thoughts and prayers. Om Shanti -The Shukla Family.”

Fans are heartbroken and some have even been admitted as this news has affected their health, some have engraved his name on their hand as a memory.

His funeral was attended by all his colleagues of the industry and Shehnaaz Kaur Gill too. Shehnaaz and Sidharth were very close to each other and is in a bad condition mentally after his demise. A prayer meet is organised on Monday.

Sidharth Shukla made his Bollywood debut with Humpty Sharma Ki Dulhania where he had a supporting role and Varun Dhawan Alia Bhatt were seen playing the lead roles.