Kiara Advani has finally wished Sidharth Malhotra, a Happy Birthday. The diva shared THIS caption and you won’t be able to resist their charm- check out her post

The rumored romance between Bollywood stars Sidharth Malhotra and Kiara Advani has gotten a lot of attention. We’ve all seen their on-screen chemistry in their recently released film, which has received positive reviews from critics and fans alike.

Kiara Advani sent her rumored boyfriend Sidharth Malhotra the sweetest birthday message. On the occasion of Sidharth’s 37th birthday on January 16, the actor was showered with good wishes on social media, one of which came from Kiara. The actress wrote, “Happy happy birthday dearest one @sidmalhotra,” with a heart emoji. Kiara captioned the photo. She also tagged him in the post. Both of them are said to be involved in a relationship. Looking at the pic, it seems Kiara has made it Insta official. 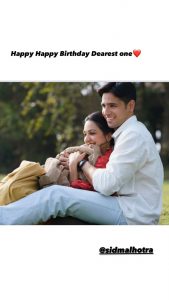 Sidharth and Kiara, who are rumored to be dating, have never confirmed or denied the rumors. They are frequently seen in Mumbai, however, hanging out and visiting each other’s homes.

A few days back Kiara was posted a picture relaxing in the pool a few days ago, looking stunning in her swimsuit. She was lying in the sun, surrounded by crystal clear water, relaxing. “Seas the day,” Kiara captioned the picture. Samantha Ruth Prabhu couldn’t help but comment on the photo as soon as she saw it and wrote, “Wowww” with a heart emoji. In the comments section, Kiara’s fans showered her with love and posted multiple heart emojis.

(Also Read: Sidharth Malhotra Birthday: From Having A Desire To Cast Opposite Deepika Padukone To Being An Artist; Here Are Some Lesser-Known Facts Of The Actor)

In the meantime, while Kiara is working on ‘Jug Jugg Jeeyo’ and ‘Bhool Bhulaiyaa 2,’ Sidharth Malhotra will be seen in ‘Mission Majnu,’ ‘Yodha,’ and ‘Thank God.