Palak Tiwari is the daughter of actress Shweta Tiwari and she is an aspiring Bollywood star. The star kid is receiving a lot of trolls for her dance in short dress at an event

The Bollywood industry always offers a chance to the newcomers and make their career. One such artist who is all set to mark her debut in the Bollywood industry is Palak Tiwari. She is the daughter of actress Shweta Tiwari, who is looking forward to make her career in acting. Even before entering the showbiz, Palak is making headines. Yes, you heard it right, but she is making the headlines as Palak is getting trolled by the netizens.

The mother-daughter duo was lately seen in Harrdy Sandhu’s song Bijlee Bijlee. Shweta Tiwari with her daughter Palak Tiwari made an appearance at the success party for the song. For the event, Palak had opted for a black strappy cutout dress while her mother, actor Shweta wore a white top and black jacket. On one hand, the fans were happy to see the duo together the other side remains dark. As the netizens took Palak to trolls for her outfits at the bash.

Speaking more of her dress for which she is getting trolled, it was a thin black dress. Her bra on the bikini-style top was visible to the viewers. Coming towards her hairstyle and makeup, Palak Tiwari left her hair open and opted for light makeup at the song’s success party.

Turning towards the trolls, one of the social media user wrote “Sub accha h bus iski ye faticher si dress chor kr”. While the other called her dress to be “ghatiya”. The next comment reads, “Dress not good”. The next person in the comment section wrote, “Are apni nahi tu maa ki izzat rakho”. The next wrote “Bakwas” for Palak Tiwari’s outfit. 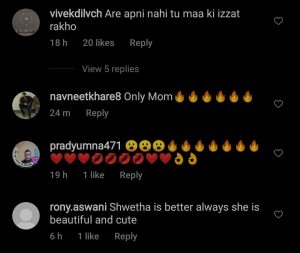 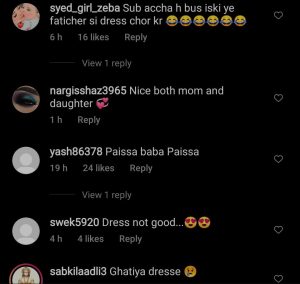 (Also Read: Bijlee Bijlee Song out: Harrdy Sandhu And Palak Tiwari’s Superhero Song Will Give You A Dystopian Vibe)

Meanwhile, speaking of Palak Tiwari’s work front, she will be entering the showbiz with her upcoming film named Rosie: The Saffron Chapter. The film is slated to release on January 14, 2022, in theatres. It is reported that the film is based on a real incident that happened in Gurugram. Palak will essay the role of Rosie in her debut film.

Shweta Tiwari Controversy: The Actress Lands Herself In Trouble After Offending Religious Sentiments While Talking About Her Bra Size – HERE’S WHY

Shweta Tiwari Controversy: The Actress Lands Herself In Trouble After Offending Religious Sentiments While Talking About Her Bra Size – HERE’S WHY

Shweta Tiwari Shines In An Orange And Pink Saree; Netizens Are Left Awestruck

Shweta Tiwari Shines In An Orange And Pink Saree; Netizens Are Left Awestruck

Shweta Tiwari Stuns In A Pink Anarkali With Matching Dupatta; Her Look Is Perfect For Your Best Friend’s Wedding Functions

Shweta Tiwari Stuns In A Pink Anarkali With Matching Dupatta; Her Look Is Perfect For Your Best Friend’s Wedding Functions