Shruti Haasan Shares Vision About Life And Its Greater Perspective Via Her Ig; Her Wise Words Of Wisdom Will Leave You Pondering

Shruti Hassan gives a bigger perspective about life sharing a motivational quote by russell brand that enhances your vision and inculcate your understanding in depth, read onto know about the quote

Shruti Haasan, the daughter of Kamal Haasan and Sarika Thakur, is a splendid actress who believes in hard work. She oozes charisma and confidence. The actress is also a playback singer and a fantastic dancer. Shruti enjoys fashion and cosmetics because she is a fashionista. Black appears to be her favourite colour. Shruti Haasan has a large fan base who admire her acting and fashion sense. Shruti Haasan is a true social media queen, as the actress is an avid gram user who captivates her fans with each post. 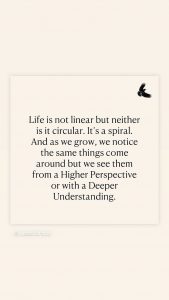 Recently, Shruti Hassan shared a motivational quote by Russell Brand on her Instagram story giving us insights about life. The quote hereby says that life is not linear neither is it circular. It is spiral, and as we grow we notice that the same things come around but we see them from a higher perspective or with a deeper understanding.

Further explaining her thoughts, the actress stated that it is critical to believe that one always has something to learn and that the day one believes one knows everything is the day one’s downfall begins. She drew an analogy here about the same with video games, saying that it’s just like a video game where you go back to level one if you don’t progress to the next level. As a result, according to her, every day has a lesson and that is just like a trophy, a moment to be seized by all. He went on to say that everyone should try to ‘level up’ in life and put their ego aside when there is something new to learn every day.

The actress was most recently seen in the Tamil film ‘Laabam,’ in which she starred alongside Vijay. Shruti is also rumoured to be appearing in director Gopichand Malineni’s new action drama, opposite Nandamuri Balakrishna, for which she recently signed on the dotted li