Shruti Haasan Gets Up, Close And Personal As She Tackles Marriage Questions With Wits

Shruti Haasan recently opened up on her marriage plans through the recent social media interactive session. Have a look at the details on the story.

Shruti Haasan recently opened up on a series of personal topics through an ‘Ask Me Anything’ session on Instagram. She posted her responses through short Instagram stories and the revelations have been leaving the fans hungry for more. The actor threw some light on her marriage plans and made it clear that it is not happening any time soon. Shruti Haasan was also proposed publicly through the QnA session and she had the most effective way of dealing with the queries, without being rude. She tackled the marriage questions gracefully and also displayed her witty side through her spontaneous responses. Shruti had also revealed through her story that she is planning a visit to Chennai after staying for more than a year.

Here is a look at the ZEE5 video with details related to Shruti Haasan’s Instagram QnA session:

South Indian star Shruti Haasan is one of the most celebrated young talents of the Tamil film industry, who has proven her calibre through her work across genres. The actor recently held an interactive QnA session on social media and her responses have been taking the internet by storm. In one segment of the video, a fan asked Shruti about her marriage plans and she made it clear that she has not been thinking about it at the moment. She uploaded a video response where she was seen rolling her eyes to showcase her lack of interest in the topic. She also stated that she would have rolled her eyes further away if she had a choice.

Shruti Haasan was also proposed through the interactive session which left her slightly surprised and puzzled. She said that the person had the wrong number and had contacted someone who isn’t on the same page. She also used a quirky filter which gave her horns to jokingly express that she is not open for alliances at the moment. Have a look at a few of the snips from Shruti Haasan’s story. 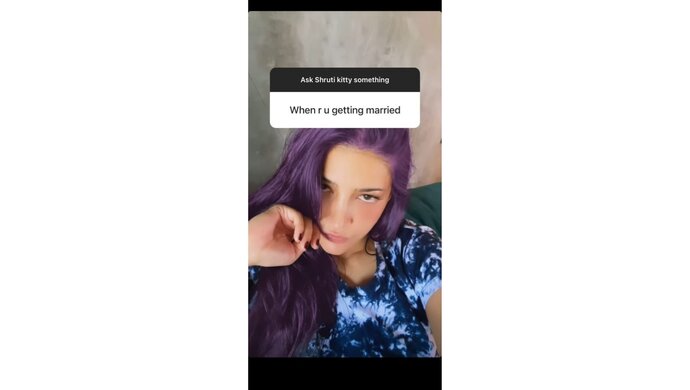 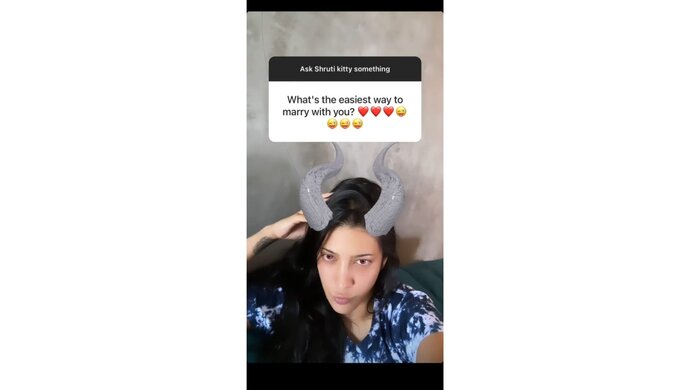 Shruti Haasan also revealed though the session that she loves the idea of coloured hair and would happily get another shade done in the next few days. She said that she was unable to choose a colour and will go for it, whenever she makes a choice.