Shruti Haasan Disses Rumours Of Her Break-up With Boyfriend Shantanu; Well It’s The Sassiest Way Ever

One needs to learn how to shut trolls up in a classy way by watching Shruti Haasan conduct herself.

Shruti Haasan has never really been the type to hide her personal life from the paps, in fact, she is one of the few actresses who is completely comfortable with PDA and leaves no stone unturned to declare their love. Everyone and their cousin know that Shruti Haasan has been in a relationship with Shantanu Hazarika. However recent news spread by a senior actor and journalist stated that all is not well in the Haasan – Hazarika paradise. In fact, the journalist insisted that the couple has called it quits. Shruti and Shantanu have been dating for nearing 2years and anyone who has seen the couple together falls in love with their pictures. So, the news came as a big surprise to the fans.

But one can always depend on Shruti to set such bizarre news right. The actress promptly took to social media and posted a photograph with Shantanu saying “When god sends angels…I am so blessed.. thank you Shantanu. “ The one pic is all it took to set all the records straight, the actress didn’t call out the journalist, nor did she write any kind of clarification, she simply stated the fact and won all the hearts of her fans yet again. 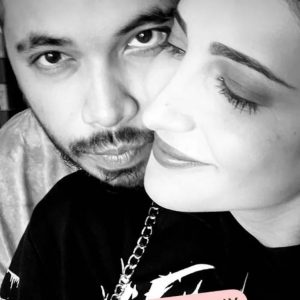 Shruti Haasan has a lot to look forward to this coming week as her new movie Laabam directed by the late S.P.Jhananathan and co-starring Vijay Sethupathi is releasing on September 9. The film promises to be a game-changer for Haasan, as the director of the film is best known to have very strong women in his scripts. Allegedly, Shruti plays a musician in the film, her character is called Clara and sources say the girl has given her best to the film. Apart from Laabam, Shruti will be seen in Salaar with none other than the Bahubali actor Prabhas. The film promises an all-India release and is being directed by Prashanth Neel, best known for KGF.

Clearly, there is no stopping Shruti, detractors be warned.