Bigg Boss digital contestants Shamita Shetty and Neha Bhasin have come forward to express their grief on the sudden demise of Sidharth Shukla, the actor was declared dead after he was brought to the Cooper hospital on Monday post suffering a major cardiac arrest

Everyone from the television and Bollywood fraternity came forward to express their grief on Sidharth’s passing away. Well, Shamita Shetty and Neha Bhasin who were in the Bigg Boss OTT house were unaware of this shocking news and now, that the two are aware of this news, both of them have taken to their social media handles to express their grief and condolences to Sidharth Shukla’s family and his rumored girlfriend Shehnaaz Gill.

Shamita Shetty expressed her grief and stated how handsome she found Sidharth and that how unpredictable life is. 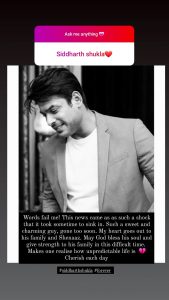 Well, talking about Sidharth Shukla, the actor was declared dead after he was brought to the Cooper hospital on Monday post suffering a major cardiac arrest. Right from television to Bollywood, every actor was seen expressing their grief on the sudden demise of Sidharth Shukla.

Talking about Neha Bhasin and Shamita Shetty, both of them were a part of the first season of Bigg Boss OTT and became really good friends on the show too. Both of them were often seen taking a stand for each other on the show and also expressed their fondness towards each other. While Neha Bhasin was excited in the mid-week evictions of the finale week, Shamita Shetty turned out to be the second runner-up of the Bigg Boss OTT season. She is also rumored to be participating in Bigg Boss 15 along with Pratik Sehajpal and the first runner-up of Bigg Boss OTT, Nishant Bhat.