Shah Rukh Khan’s son Aryan Khan’s arrest has shocked the B-Town fraternity. The star kid was arrested on Sunday following a raid on a cruise party in Mumbai. Reports read that Aryan is booked for consuming drugs. Amid the ongoing controversy, Manish Malhotra and Karan Johar get snapped at the Mumbai airport

Shah Rukh Khan’s son Aryan Khan’s arrest is the newest talk of the town and has sent shock waves throughout the B-Town fraternity. The star kid was arrested on Sunday after the Narcotics Control Bureau (NCB) had raided a cruise party in Mumbai. Reportedly, Aryan Khan was among the invitees at the cruise party and was arrested under the Narcotic Drugs and Psychotropic Substances (NDPS) Act 1985.

NCB officials have demanded to produce him in the court till Oct 7 and remand him till the same date. Reportedly, the star kid was consuming and selling drugs during his UK and Dubai stay. However, amid all the Aryan Khan drugs and arrest controversy, celebrity fashion designer and ace filmmaker Karan Johar were spotted in the Mumbai airport heading towards their cars respectively. 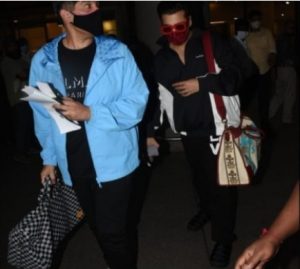 Karan Johar was seen wearing a black jacket with black pants. The filmmaker was wearing his mask keeping the rules of Covid-19 in mind. To complete the look, the director wore red sunglasses. He did wave at the shutterbugs and made his way to his car. Ace designer Manish Malhotra was seen wearing a denim jacket paired with a black t-shirt and pants. He was also wearing a mask. It is speculated that their sudden return to Mumbai is because of Aryan Khan’s arrest.

Well, many B-Town celebrities have supported Shah Rukh Khan’s son Aryan Khan and also penned down notes for him on their respective social media handles. Pooja Bhatt, Mika Singh, Suniel Shetty, Hansal Mehta and others are with him.

For the unversed, the NCB had seized 13 grams of cocaine, five grams of MD, 21 grams of charas and 22 pills of Ecstasy and Rs 1.33 lakh from their raid at the cruise liner Cordelia. The others arrested are Munmun Dhamecha, Arbaaz Merchant, Ismeet Singh, Mohak Jaswal, Gomit Chopra, Nupur Sarika, and Vikrant Chhokar.