Shah Rukh Khan’s wife Gauri Khan shared a cool picture of their kids- Aryan Khan with AbRam Khan from their gaming session. Commenting on wife’s Insta post, SRK wrote that, ‘Brother who play together stay together’

The star wife captioned the post, “Boys’ night out.” In the picture, their younger son AbRam is seen sitting in his elder brother Aryan Khan’s lap and watch him play. This adorable duo received love from the fans and Gauri’s friends Amrita Arora, Zoya Akhtar, Farah Khan Kunder also commented on the post. 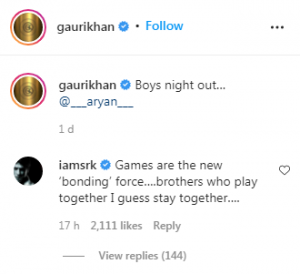 Previously , Gauri shared a bunch of pictures of her daughter Suhana Khan posing along the poolside with a caption telling the fans that Blue is her favorite colour. Gauri Khan also share adorable pictures of their youngest son AbRam calling him, her Mike Tyson as he wore red boxing gloves. Gauri shared a beautiful family moment where all the three siblings were posing together for the picture, On elder son- Arayan Khan’s birthday

During his recent Ask Me Anything session on Twitter, SRK had revealed how his eldest son Aryan is keen on becoming a filmmaker, while his darling daughter Suhana Khan wants to become an actor. For the unversed, Suhana Khan is currently in New York, where she is studying film at Columbia University. Suhana has already featured on her first magazine cover in 2018 For Vogue. , Suhana wants to pursue her dreams of becoming Actress after finishing her studies.

(Also Read: Shah Rukh Khan And Rajkumar Hirani’s Next Project To Go On The Floors Soon; Touted To Be An Entertaining Comedy Flick)