Superstar Shah Rukh Khan recently added another year of experience to his living as he turned a year older on November 2. B-Town actors and actresses had flooded the social media by wishing him on a special day. The superstar’s daughter has wished her father in the sweetest way possible on social media.

Internet sensation and Shah Rukh Khan’s daughter Suhana Khan took onto her social media and shared the sweetest childhood images and titled it with ‘Best Friend’. These two words are more than enough to give the viewers an understanding of the bond the father-daughter duo share 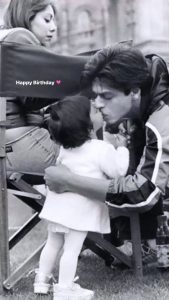 In this picture, we can see a beautiful moment captured in monochrome colors of Suhana kissing her father with her mother Gauri Khan in the background. This is a fulfilling photograph.

In the second story, we can see Suhana with Shanaya Kapoor who is Shah Rukh Khan’s birthday twin.

Recently, Shah Rukh Khan had a tough time for almost a month with his son Aryan’s arrest case. Salman Khan and his sister Alvira Agnihotri had visited Mannat. Salman juggling amid his shoot had visited over three times. He had been there for him when Shah Rukh Khan needed him the most. This is what classic true friendship looks like. Even Hindustan’s Bhai Salman Khan wished his brother on a special day in a social media post.

Shah Rukh Khan and Salman are against each other on the professional front but they share a great friendship off-screen. The actors are often seen standing with each other through thick and thin supporting each other.