Bollywood actors often share adorable pictures of them on their social media accounts. Other times the paparazzi snap them around as they step out in the city. Earlier today, B-Town actresses Janhvi Kapoor and Sara Ali Khan were seen making their way out after a workout session. Janhvi and Sara are known to be fitness lovers and often, are spotted heading to work out in the city. Sometimes they opt for pilates and other times, hit the gym. Both the actresses never mess with their fitness routine. Unlike every time, they both were snapped today after they finished their workouts.

Kedarnath actress, on Monday afternoon, was seen at two places. Firstly she was snapped post her Pilates session. Sara waved to the paps from a distance as she posed for them. In the photos, Sara is seen donning a white kurta and palazzo with a matching dupatta. She left her hair open and flashed a bright smile at the people. After that, she headed to one of the films’ offices for a meeting. Paps never leave her alone, again following her they snapped the actress. This time Sara was seen donning a face mask. 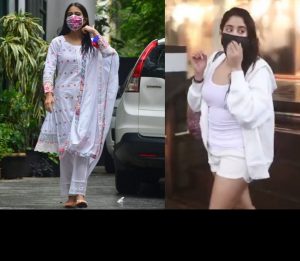 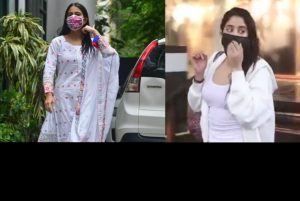 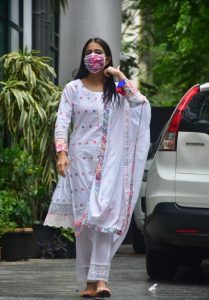 Now coming towards, Dhadak actress, she was snapped outside her gym today. Janhvi Kapoor was seen coming out of her gym in a yellow top and black shorts to take something from her car. Later, post-workout, Janhvi looked fresh after completing her gym session in an all-white look. She accessorized herself with a bag and completed an athleisure look for the day. 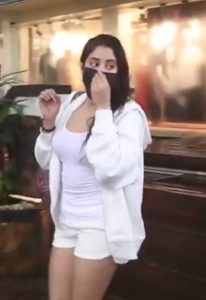 Both the actresses celebrated the holy festival of Ganesh Chaturthi and dropped alluring pictures on their social media accounts. Talking about Sara Ali Khan’s work front, she will be next seen in Atrangi Re with Akshay Kumar and Dhanush in the lead roles. The film is directed by Aanand L Rai and produced by him along with Bhushan Kumar. Now coming towards Janhvi Kapoor’s professional front she will be seen next in Good Luck Jerry. The film is directed by Siddharth Sengupta and produced by Aanand L Rai. She also has a Hindi remake of Helen and Dostana 2 in the pipeline.