Salman Khan registers a case against the makers of the game ‘Selmon Bhai’ as a result, the game is temporarily restrained.

Mumbai’s civic court has ordered the makers of the online game ‘Selmon Bhai’ to shut down their game after Bollywood actor Salman Khan filed a lawsuit against them. The game is based on a hit-and-run incident involving the Tiger 3 lead. Civic Court judge K M Jaiswal, passed the order on Tuesday. The Civic Court, in the order, forbade the Parody Studios Pvt. Ltd who are the directors of the game to not disseminate, launch, relaunch or re-create the game in any way or else strict repercussions will be levied upon them. Also they are not allowed to make any kind of content relating to the actor.

The Court also directed the makers of the game to take down the game from Google Play Store, and all the other platforms. As ETimes reported the court’s statement saying, “Upon watching the game and its images, it prima facie matches with the identity of the plaintiff (Khan) and to the hit-and-run case connected to the plaintiff.” 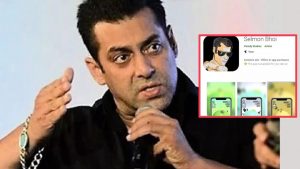 The Court further added, “When the plaintiff has not given his consent for development of the game, which is very similar to his identity and the case against him, certainly his right to privacy is being deprived and his image is also being tarnished”.

The Court added that the game developers have misused Salman Khan’s identity for popular and commercial gain. Salman Khan had filed the case last month against the game saying that the name and the images displayed in the gare are morphed and being portrayed as false caricatures.

The Court has given the matter a further hearing of September 20, as they continue to investigate the matter. The Bombay-High-Court in 2015, had relieved Salman Khan of all charges of hit-and-run case.