Salman Khan And Family Were Strictly Against Helen To Get Married With Father Salim Khan; Deets Inside

While Salman Khan and his family now have a close relationship with his father Salim Khan’s second wife, Helen, the situation was quite different Back in the days in 1981. Salman Khan, Sohail Khan, Arbaaz Khan, Alvira, and their mother Salma were all against Salim Khan marrying Helen on his 86th birthday. Continue reading to know more

Today, the legendary actor, producer, and scriptwriter Salim Khan turned 86. Salim Khan with his writing and his films, not only changed the picture of Indian cinema in the 1970s and 1980s but also lit the lamp of hope in the then rising Bollywood film industry.

He has co-written several great films with Javed Akhtar, including Sholay, Deewar, and many others. Coming out of the reel life, Salim Khan’s real life is no less than a film with overdramatic married life, fortune with the career and success. 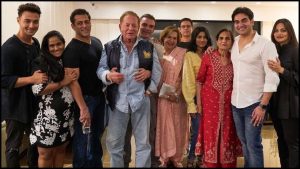 Salim’s decision to marry actor-dancer Helen in 1981 perplexed his entire family. Salim was already married to his first wife, Salma, and they had four children. His decision to marry Helen was initially met with scepticism by his family.

Back in the day, Salim Khan fell in love with Sushila Charak and they got married in the year 1964. After then Sushila cahnged her name ti Salma Khan. They had three sons and a daughter together, Salman, Arbaaz, Sohail and daughter Alvira.

Salim and Salma no doubt had made a big happy family but later Salim Khan got inclined towards then item song queen Helen Anne Richardson. During the 1960s Salim helped Heleen to get a lot of new work. Salim added a new feather to Helen and started to build excellent camaraderie on the professional front. Soon things went beyond professionalism and they decided to tie knots together.

Salma Khan revealed in an interview that the marriage initially disappointed and depressed her. The children of Salma- Salman, Arbaaz, Sohail, and Alvira, did not even speak to Helen for a long time. But as time heals everything, the family accepted Helen as a part of their family.

(Also Read: Salman Khan Recalls His Reaction When Arpita Khan Introduced Aayush Sharma To The Family And Announced Her Intention; Superstar’s Reaction Will Leave You Stunned)

Helen used to look after everyone in the family, and eventually, the entire family came together. Helen Richardson, a Burmese resident, began her career as a background dancer in the Hindi films industry and gradually became involved in films due to her extraordinary performance.

On the professional front, Salman Khan’s next film, Antim: The Final Truth, will be released in one week. The film is directed by Mahesh Manjrekar, stars Aayush Sharma and Mahima Makwana. Bhaijaan will also appear in Tiger 3 and will make brief appearances in Aamir Khan’s Laal Singh Chaddha and Shah Rukh Khan’s Pathan.