Rashmi Rocket’s First Review Out: Vicky Kaushal Has Only Good Things To Say About The Sports Drama

Taapsee Pannu’s Rashmi Rocket is the talk of the town. The upcoming sports drama features Taapsee essaying the role of a Gujarati sprinter. The film is all set to release on ZEE5 on Oct 15. However, before it, leading reports say that the first reviewer of the film is none other than Vicky Kaushal. The handsome hunk has only good things to say about the film as he seems to be incomplete awe of Taapsee Pannu’s performance in the film.

ZEE5’s original movie Rashmi Rocket includes an ensemble cast of Abhishek Banerjee, Supriya Pathak, Priyanshu Painyuli in lead roles. However, Vicky Kushal’s words of praise about the film will make you want to binge-watch Rashmi Rocket. The makers even arranged for a special screening for friends and family and a special guest at the screening was actor, Vicky Kaushal who was moved by the film and its performances. 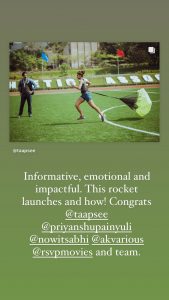 Taking to his gram, Vicky Kaushal mentioned how he found Taapsee Pannu’s Rashmi Rocket to be ‘informative, emotional and impactful’. In addition to the cast of the movie, others who attended the screening were Sidharth Roy Kapoor, Soojit Sarkar, Sumeet Vyas, Salonga Batra, Bhoomi Trivedi, Gaurav Chopra, Nidhi Singh, and more.

Taapsee Pannu’s Rashmi Rocket is an Akarsh Khurana directorial. Taapsee Pannu will surely enthrall everyone with her lighting performance in Rashmi Rocket. The film is backed by Ronnie Screwvala.

However, the film’s shoot commenced last year and it was extensively shot across Pune and Mumbai. Taapsee Pannu had documented her entire physical transformation for the film and raised the entire enthusiasm for her fans and the audience commented on her ripped body.

As the story of Rashmi Rocket Rocket unfolds on Oct 15, watch sports, drama, entertainment, dance, romance, gender testing in one film in the skin of Taapsee Pannu only on your digital screens.