Rani Mukerji, who co-starred with Shah Rukh Khan in the 1998 film Kuch Kuch Hota Hai, has defended her and Shah Rukh Khan’s roles. Rani Mukerji stated in an interview that her character (Tina) in the film had enough depth for Shah Rukh’s character (Rahul) to fall for her. She also stated that Tina was difficult to obtain, it piqued Rahul’s desire in pursuing her further.

Shah Rukh Khan, Kajol, and Rani Mukerji appeared in Kuch Kuch Hota Hai, a romantic comedy-drama. Karan Johar wrote and directed the film, which became a box office success. However, many individuals have pointed out that Shah Rukh’s character in the film looked to be misogynistic. The way women are portrayed in the film has also been criticized by the public.

Rani Mukerji stated in an interview with a leading publication, She (Tina) was the kind of someone who was really hard to get for him (Rahul), which led to him having the curiosity to go even further for her.  The fact that she sang Om Jai Jagdish Hare on the college campus when he was believing that she was born and raised in London, the fact that she is so firmly tied to her culture and grounded – those and a lot of other factors probably drew Rahul to Tina as a person as well. 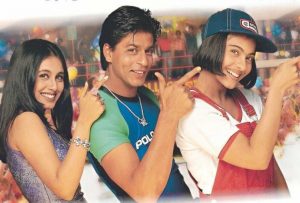 She also stated that she will not categorize it since he chose someone who looked amazing rather than Anjali, who was more of a tomboy. She’s not going to make it as lighthearted as that. She would argue that Tina’s character had a lot of depth for someone like Rahul to fall for her since, at the end of the day, it was Tina who comprehended Rahul and Anjali’s love for each other. In turn, she orders her daughter to reconcile the two of them. Tina had a lot of depth as well as being a good-looking woman.

Rani Mukerji was most recently seen in Bunty Aur Babli 2 with Saif Ali Khan. Mrs. Chatterjee Vs Norway, directed by Ashima Chibber, will be her next project. Emmay Entertainment and Zee Studios are producing the film alongside Monisha Advani, Madhu Bhojwani, and Nikkhil Advani.