Ranbir Kapoor was spotted with a fan after leaving the city yesterday. The actor took the dapper casual brief on another level. check it out

Ranbir Kapoor, the iconic star of Bollywood, has a massive fan following. On all social media platforms, he has several fan clubs that share rare and unseen photos of him. We recently came across an unseen photo of Ranbir with a fan supposedly from the UK.
Yesterday He was seen at the Mumbai airport leaving the city.

Ranbir Kapoor has a large number of ardent fans and fan clubs who keep a close eye on everything that surrounds him. On Wednesday, one of Ranbir’s popular fan clubs released a photo purportedly from the United Kingdom. 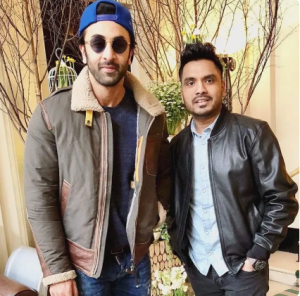 While it is unclear, whether the photograph is taken in the United Kingdom or elsewhere, it appears to be an unseen one. The actor was wearing his signature baseball cap, blue distressed pair of denim with a blue t-shirt. He completed his look with a winter jacket and suede boots.

Ranbir Kapoor will be returning to work soon, as he will be filming for nearly 15 days in December. The actor’s wedding preparations are well underway. Pinkvilla revealed a few weeks ago that Ranbir and Alia Bhatt are going to tie their knots in an intimate ceremony with near family and friends in January 2022, most likely in Mumbai or Rajasthan. Ranbir is currently wrapping up film projects such as Ayan Mukerji directorial Brahmastra and Luv Ranjan’s romcom.

On the work front, apart from Luv Ranjan’s, Ranbir will be seen in Brahmastra with the co-star Alia Bhatt. He also has Shamshera on his bucket list for release. He is doing a double role in the film. It also stars Vaani Kapoor and Sanjay Dutt. Apart from this, Ranbir is yet to start work on Animal with Anil Kapoor and Parineeti Chopra.
He often comes into the limelight for his relationship with ladylove Alia Bhatt.