Ranbir Kapoor In Tamasha Vs Rockstar: Which Character Was More Intense?

Ranbir Kapoor plays two brilliant roles – Jordan in Rockstar and Ved in Tamasha. With the similarities and differences between the two characters, here is a fun little comparison between them.

Ranbir Kapoor has been known for his versatile roles in the Hindi film industry. He has portrayed all his roles with such brilliance that his performance feels completely natural in those. Today, let us take a look at two of his roles, who had a troublesome journey in following their passion – Jordan from Rockstar and Ved from Tamasha. We wonder which of the two would have more advantage points if put against each other.

Jordan’s journey in Rockstar began when he was trying hard to make it big as a musician. After he was advised that for a singer, honesty in singing comes out of heartbreak, he sets out to get his heartbroken. Ya, really! In the journey, he meets a girl, Heer, who he eventually falls for. Because she is already engaged, he ends up with what he desired – heartbreak. He does make it big as a singer, with thousands of fans going crazy for him. Although, his inability to be with Heer and her terminal illness causes him to become an enraged singer who can’t control his temper and also lets it out through his singing.

Ved, on the other hand, was a calm and composed person. In Tamasha, we see his story begin when Tara meets him during a holiday (Oh Croatia!). He becomes a different person around her, a fun and free-spirited guy impersonating some classic Bollywood characters. He even makes stories and characters on the spot. However, along with Tara, we too see his different side when he returns to his regular life. He is a simple fellow who is dealing with the monotony of his life. This change brings ripples in his relationship with Tara, which helps him face the issues in his life and be brave enough to break the monotony and choose to follow his passion. 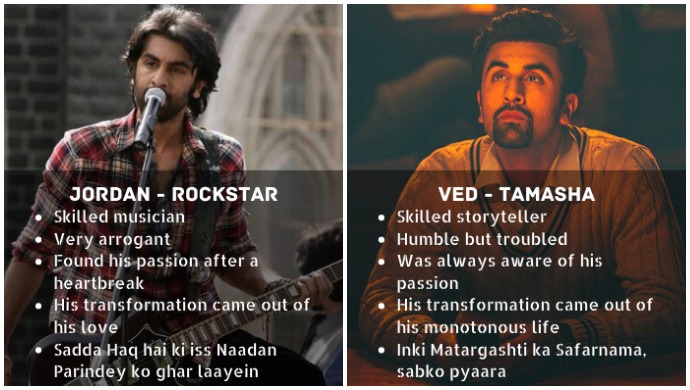 While Jordan is a skilled musician, Ved, is a skilled storyteller and actor. Jordan’s transformation in his character came out of his heartbreak and all the pains that he had suffered in life. Ved, on the other hand, undergoes a gloomy stage after realising he is stuck in his monotonous life, far from his passion.

And of course, Jordan is an enraged and arrogant fellow, while Ved is calm and humble. You can expect a calm reaction from Ved if you reject his marriage proposal. But do not dare to give Jordan a plate of samosas with less chutney… man will he lose it!

Also read: Ronnie Of Baaghi VS Karan Of Commando: Who Is The Best Fighter In Bollywood?

We can’t help but love both these characters created by Imtiaz Ali, and feel empathy for them. All their points have equal advantages for us, but just for Ved’s composure, we’ll let him have an extra brownie point. With that, Ved wins this round!

We wonder… if Jordan hears about this, will he ask for his right to win with a performance of ‘Sadda Haq, aitthe rakh’? We love the track, so not an issue! We’ll also join Ved’s celebration in grooving to Matargashti on a khuli sadak!

Watch Ranbir nails the two roles, in Rockstar and Tamasha on ZEE5.