Quick Recap Of Sathya: Here’s What You Need To Know Before You Watch The New Episodes

Sathya is all set for a comeback on the tube. So get set for #EntertainmentUnlocked! Scroll down to read more.

Shooting for TV shows, which was suspended after the nationwide lockdown is all set for a comeback on the tube. Yes, you read that right! Reportedly, the permission for the same has been granted and the shows will begin soon. For now, you may be assured that Sathya will return to your television screens once again with new episodes. In fact, we have a special lockdown episodes of Sathya scheduled to start airing from June 8 onwards. So get set for #EntertainmentUnlocked, and make the best the use of it! In the meantime, here’s a quick recap on what happened in Sathya before lockdown.

Here’s A Quick Recap Of Sathya!

A brave tomboy Sathya, who lives with her mother, grandmother, and her sister Divya, runs a garage that she inherited from her deceased father. She enjoys life as it comes, and is hopelessly in love with a guy named Prabhu, however, to him, she is only a friend.

Prabhu is a rich man and he is already engaged to Divya, who is none other than Sathya’s sister. But Sathya is unaware of this. Neither does Prabhu realise that his friend is related to his fiancee.

Prabhu who friend-zoned Sathya for over a year, only confesses the truth about his engagement when his wedding date inches closer. Sathya feels heartbroken to know that the love of her life is going to marry her own sister.

Unfortunately, Sathya is unaware of her sister Divya’s plans about getting married to Prabhu only for his money. Divya even dumped her ex-boyfriend to marry Prabhu on learning about his wealth.

However, things take a tumultuous turn when Divya’s ex-boyfriend abducts her on her wedding day and plants a note, stating that she has run off with him on her own. Believing that the bride has eloped, the elders compel Sathya and Prabhu to get married. While Prabhu initially resists he eventually caves in when he sees his dad’s emotional state. 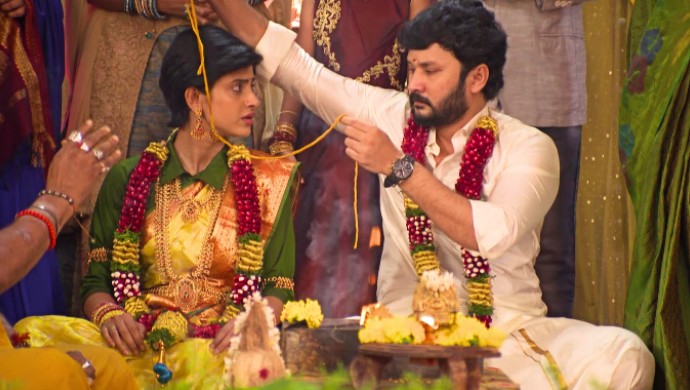 Prabhu marries Sathya to save the family’s reputation. However, Prabhu was still in love with Divya and never considered the tomboyish Sathya to be anything more than a friend. Post their marriage, Prabhu always keeps reminding Sathya that they are not really married but are only pretending and so, she must maintain a safe distance from him.

Initially, Prabhu’s mother too was not fond of Sathya. In fact, they had a very rocky start during the first couple of months. Yuvasree, who disliked Sathya from the beginning, tried to keep her son away from her, assuming that her company is not good.

And when they were married, Yuvasree was mean to her new daughter-in-law until the day she injured herself. Sathya took good care of her. Yuvasree later not only realised her mistake but also started to finally notice Sathya beyond her appearance.

At first, Sathya and Prabhu only pretended to be a happy couple in front of their parents but gradually Prabhu became friendlier with Sathya and started to like her company. The two slowly rebuilt their trust and friendship. And Prabhu began to like Sathya more than a friend when the latter went to jail for him.

Her selflessness drew him closer to her. However, he is unable to realise his love for her.

Meanwhile, Vinod, who tried to send Prabhu behind bars, is jealous of Prabhu’s success and he aims to bring him down. But to his surprise, Prabhu’s wife Sathya took the blame on her and went to jail.

However, this did not affect Vinod in any way. He went on to make Sathya’s life even more miserable by making a strong case against her so that she never gets out of jail. This way, Prabhu will not have her support and will eventually be unable to perform in his profession owing to his personal life.

In the court, Sathya, however, manages to change the whole game. While everything seems to work according to Vinod’s favour; and just when the judge is about to give the verdict, Sathya produces proof that proves her innocence.

The judge declares the decision in her favour. Then the police arrest Vinod and release Sathya. Before Vinod is taken to jail, Sathya warns him to stay away from her family.

Meanwhile, Vinod is already making other plans against Sathya. He has Divya in his custody and he might just free her, knowing that the appearance of Divya in their (Sathya and Prabhu’s) lives will definitely impact this fragile relationship.

While Sathya and Prabhu have come closer than before, a fight between the two due to a misunderstanding changes the equation between them. And Prabhu, instead of communicating, misunderstands Sathya. He also becomes mean and hurt her feelings.

Prabhu tells her that he will never talk to her again. Sathya, who did everything possible to win his trust and love, feels heartbroken as Prabhu fails to see any of her efforts. She realises that Prabhu is still madly in love with her sister, who left him on his wedding day. So, Sathya decides to leave Prabhu.

Sathya packs her bag to leave the house and tells Yuvasree that her mother is ill as her reason for going back to her mom’s house. But Prabhu’s ego doesn’t allow him to apologise Sathya and stop her from leaving. Later, Sathya hides the truth from her mother and grandmother about her fight with Prabhu which made her leave the house.

Meanwhile, Prabhu struggles to survive without Sathya and decides to bring her back. But Sathya does not seem to get convinced. Patti, who has found out the truth, asks Sathya to compromise and forgive Prabhu. She also suggests that Sathya return home with Prabhu.

When Prabhu comes to take her back to his home, Sathya refuses to go with him. As Sathya’s mother is sick, Yuvasree visits her. And at the time of leaving, she tells Prabhu to stay back, and help out Sathya and return home with her.

Sathya doesn’t return home with him and an upset Prabhu confesses to his mother about their fight over a gift on Valentine’s Day. He tells Yuvasree that she broke his ice frame on purpose to hurt him as she knew how much it meant to him.

Yuvasree then explains to him that she did not break his gift. She adds that on Valentine’s night around 3 am, Sathya made the same ice frame for him as a gift as she knew how much it meant to him. She also tells him that he can never find anyone like Sathya, who loves him blindly.

On realising his mistake, Prabhu apologises to Sathya and she forgives him. Later, when he asks her to come home with him, Sathya refuses. She adds that she is not angry about his behaviour but is hurt as he has not understood her at all or her feelings.

Sathya tells Prabhu that she can’t live all her life hoping that one day he will change his mind, fall in love with her and accept her to be his wife. So, she advises him to return home as this pretentious marriage is not a great idea and is only going to hurt the two of them.

Sathya also tells him that she will only go with him if he completely accepts and only loves her; until then, she advises him to stay away.

Will Prabhu realise his love for Sathya and take her home or will Divya make an entry and change the whole game? Watch the new episode to find out what happens next, which will soon be streaming on the platform. Stay tuned!

If you like to watch more such shows, also watch Nachiyarpuram, currently streaming on ZEE5.