Vir Das, an actor-comedian, was nominated for Best Comedy at the International Emmy Awards 2021 but did not take home the medal. Vir Das, on the other hand, took satisfaction in representing his country on an international stage and was overjoyed to earn a medal for nomination while enjoying his exquisite salad. While comedian Vir Das received a nomination in the Comedy category for his digital platform series, actor Nawazuddin Siddiqui received a nomination in the Best Performance in the Actor category for his series featuring Sushmita Sen in the main role.

At the prestigious award ceremony, none of the candidates were able to win. According to Vir’s latest post, as he became a part of the event, he was nominated for best humor at the International Emmy Awards, for jokes on his digital platform series, which is a massive magnificent show that he won. But he got the medal and ate the wonderful salad with a unique crispy cheese topping. It was a privilege to represent my nation. It is always, intended for India. 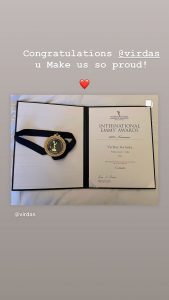 Despite the criticism, numerous celebrities, including Shashi Tharoor, Hansal Mehta, Richa Chadha, and Kapil Sibal, publicly supported Vir Das. Later, the comedian issued a statement stating that his remarks were not intended to be insulting to the country.

(Also Read: Priyanka Chopra And Nick Jonas Are Truly Made For Each Other; These Pictures Are A Proof – SEE PICS )

Vir Das also revealed his outfit on the red carpet of the 2021 International Emmy Awards, where he was joined by Nawazuddin Siddiqui. Vir Das, an actor-comedian, has lately made headlines for his six-minute satirical video I come from two India’s monologues,’ which he premiered at the John F. Kennedy Center in Washington, DC.