Priyanka Chopra Jonas takes time off from the shooting of Citadel and spends quality time with mother Madhu Chopra and pet Diana. The trio go sightseeing in picturesque locations of Spain

Priyanka Chopra Jonas is among the actresses who have reached across India and is flaunting her acting skills. She has got a fan base from all over the country and even across the horizon. Priyanka is currently in Valencia, Spain, where she is shooting for her upcoming series, Citadel. Today, PeeCee took to her Instagram stories to give a glimpse of her Spain tour. She shared a series of photos with her mother, Dr Madhu Chopra in Spain. They posed outside historic sites and walked on the beach.

In one of the photos shared by Priyanka, she can be seen wearing a white shirt, black skirt. She tied her hair in a bun and happily posed for the camera. Whereas Madhu is wearing a black floral dress and carrying a red handbag. The show-stealer in the photos was Priyanka’s dog, Diana. They are standing in front of a large gate of a historic building. While sharing the photos, PeeCee captioned it as ‘Site seeing’. 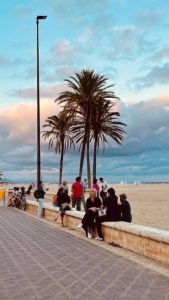 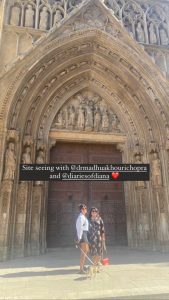 A few days ago, Priyanka Chopra Jonas had shared pictures from another outing on her social media accounts. In the pictures, the actress can be seen on a boat. PeeCee can be seen posing in yellow and red swimsuits. She has also carried a white lace shrug with the swimsuits and gave us major fashion goals. Priyanka posed with her mother in one photo, and with her dog and two friends in another picture. She captioned her post as “A perfect day off #AboutYesterday.”

(Also Read: Priyanka Chopra Jonas’ Cousin Meera Chopra Files An FIR Against Interior Designer And Claims He Threw Her Out Of Her House)

Talking about her project, Citadel, it is a spy series produced by The Russo Brothers and will also star Richard Madden. The crew recently flew into Spain for a new shoot schedule, earlier this year they shot in London.

Meanwhile, talking about Priyanka Chopra Jonas’ work front, she will be next seen in The Matrix: Resurrections with Keanu Reeves. PeeCee also has Text For You with Sam Heughan of Outlander, an untitled wedding comedy with Mindy Kaling, the Sangeet project with Nick Jonas. Priyanka will also feature in Jee Le Zaraa, with Alia Bhatt and Katrina Kaif.