Beyoncé is still the queen of yacht photo shoots. The Grammy winner, 40, posed in a glittery green little dress with quirky floral overlays and transparent heels for a series of new Instagram photographs. A citrus handbag and yellow-framed cat-eye sunglasses completed the singer’s ensemble.

Jay-Z, her husband, enjoyed the floral gesture as well. As seen in the last four pictures from the post released on Thursday, Sept. 23, the rapper, 51, donned a black button-up t-shirt with floral designs in contrasting tones of red, green, and blue, and paired the top with black slacks. Along with other yacht dwellers, the couple was seen enjoying glasses of bubbly. 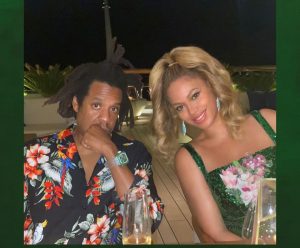 The latest photos are most likely from Beyoncé’s birthday celebrations on Amazon CEO Jeff Bezos’ $500 million yacht. On September 4, she turned 40 years old. On Thursday, Beyoncé released a fresh post on her website that included the images as well as a handwritten statement to her fans.

She expressed her gratitude for her heartfelt birthday wishes and reflected on turning another year older, adding, “Whoever tried to teach women to believe that we are supposed to feel old or unhappy when we turn 40 got it wrong.”

“As Virgo season comes to an end, I hope my fellow Virgos had great birthdays,” she began the letter. “I’m so thankful for every inspiring human who took the time to send me all the beautiful messages.” Later, she added, “This is the first year that I really understand what it means to be alive and to live in the moment. It’s the first time that I have an understanding of how fragile life truly is, how hard life can be at times, and therefore how important it is to stop and smell the roses during the good times.”

“The more mature I become, the more I understand and the deeper my joy grows,” she continued. “There’s a freedom and liberation knowing that I’ve made it to the other side of my sacrifice. I’m finally giving myself permission to enjoy the seeds I’ve worked so hard to plant my whole life.” Beyoncé ended the letter with “deep” “deep” “deep” love and even included a doodle of a bee.