Nora Fatehi leaves no stones unturned in impressing her fans. The actress has shared a boomerang video on her social media account in which her workout glow can be clearly seen

Nora Fatehi is a complete package of beauty and versatile skills. She is at the forefront of acting and dancing too. Besides this, the actress also makes us turn heads with her hot and sizzling photos. Recently her dance video Kusu Kusu got released from the upcoming film Satyameva Jayate 2. Today, on Wednesday, Nora Fatehi shared a video on her Instagram account in which she can be seen sweating it out.

Nora took to her Instagram story to share a boomerang video after her workout session. In the video, she can be seen lying on the floor and she kept her hand on her forehead. Nora opted for a black sports bra and gym pants. She can be seen glowing as the stunning actress had sweated it out. 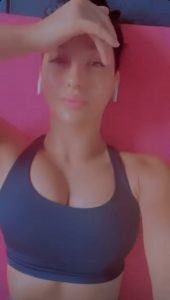 Speaking more of Nora Fatehi, the actress is being showered with love for her performance in Kusu Kusu from Satyameva Jayate 2. The actress revealed that she had a tough time on the sets. While talking to a leading portal Nora said that on the sets they often have minor incidents like the scraping of knees, bleeding of feet, but this definitely has been her worst experience on set.

Nora said that the necklace was extremely tight around her neck because of the weight of the cape and since she was constantly moving, it kept brushing more leaving horrifying marks at the end of the shoot. Speaking more of it the actress said that it almost felt like someone has tied a rope around her neck and dragged her across the floor, but because they had limited time for the shoot, she continued to film the song and only took a break after they completed the sequence.

Nora Fatehi has created a special place in the hearts of the audience over the period of time. Her fans laud her for anything she does. The boomerang that she shared on her Instagram story has left us motivated.