Ninnila Ninnila: Did you watch the very enjoyable trailer of this Nithya Menen starrer yet?

Did you watch the trailer of Nithya Menen’s new offering Ninnila Ninnila yet?

The trailer of the much anticipated Telugu comedy-drama Ninnila Ninnila is finally out! The movie stars  Oh My Kadavule actor Ashok Selvan,  OK Bangaram actress Nithya Menen and Ritu Varma in the lead roles. It is written and directed by Ani. I.V.Sasi who makes his debut as a director with Ninnila Ninnila.

The key characters of Ninnila Ninnila are Dev (Ashok Selvan), a hefty genius chef with muscle spasms, Tara (Ritu Varma), his co-worker who suffers from Obsessive-Compulsive Disorder, and Maya (Nithya Menen), a happy-go-lucky girl with the mind of a child. Writer-director Ani Sasi described this film as a perfect combination of icing comedy with sprinkles of romance on social media.

Also Read: Fashion Friday: Got a date? Take inspiration from Prema Entha Madhuram’s Anu and Trinayani’s Ashika for your outfit on Valentine’s Day

Nithya Menen took to Instagram and posted the posters of the film. The film will be releasing on February 26, 2021, as Ninnila Ninnila in Telugu, and also has a Tamil version titled Theeni. The actress captioned the post “#NinnilaNinnila #Theeni Trailer Out on Feb 5th from 11 am! waiting for you to see this beautiful character I’ve played”.

Ashok Selvan also posted the same on his Instagram with the caption, ” My debut Telugu film #ninnilaninnila! Get ready to drench in the perfect combination of icing comedy and sprinkles of romance. Catch the Trailer of #NinnilaNinnila & #Theeni (Tamil) from 5th Feb, 11 AM!”

While Dhanush launched the trailer of the Tamil version through his Instagram stories, Sai Dharam Tej launched the Telugu trailer via his Instagram stories. “Happy to launch my good friend Nithya Menen’s Theeni trailer” said Dhanush while launching the trailer. Sai Dharam Tej took to his stories and wrote, “Happy to launch the super fun and gripping trailer of Ninnila Ninnila. My best wishes to B.V.S.N Prasad Garu, Baapi Anna and the entire team. Good luck.”. 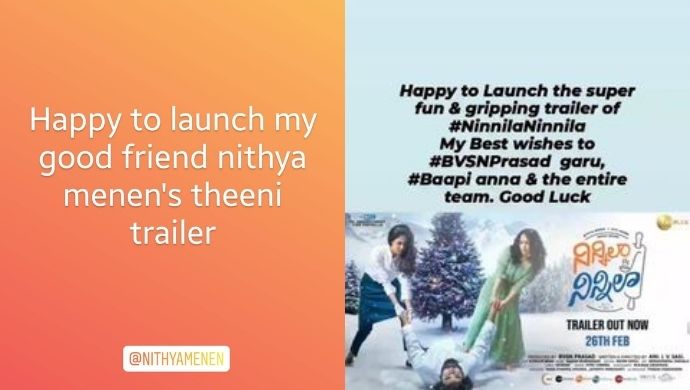 Stream Sa Re Ga Ma Pa- The Next Singing Icon and many shows like this, only on ZEE5.