Nargis Fakhri Enjoys Lunch Afternoon With Anupam Kher In The US; Actor Duo Spends Gala Time Together And Exchange Smiles

Nargis Fakhri and B-Town veteran Anupam Kher spend good time in the states, by having lunch at a restraunt in the US

Nargis Fakhri has been in the states since the lockdown began and having a gala time since then. The B-Town diva had been posting fun videos and keeping her fans entertained through her dazzling looks and talent. The actress was last seen in 2016 in the film Housefull 3. She has garnered a huge fan following in a short period and recently, the actress took to her Instagram account and posted lovely pictures with the legendary actor Anupam Kher. The actress was spotted having lunch with him and the pictures speak for themselves as it shows that the two shared many smiles, good food and had a gala time.

Veteran actor Anupam Kher is also currently in the states for the shooting of his upcoming film Shiv Shastri Balboa. Both the actors are highly active on their social media and are supremely loved by their fans. In the photographs, actress Nargis Fakhri is seen wearing a black hoodie. The actress has let down her hair for the lens. On the other hand, Anupam Kher has worn a light purple shirt and pants. 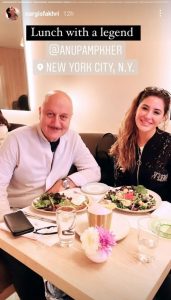 As per the reports from a leading publication, Nargis Fakhri tries to stay connected with her Bollywood friends namely Varun Dhawan, Huma Qureshi and Illeana D’Cruz. However, the actress surprised her fans by sharing pictures from her lunch date with actor Anupam Kher. The actors can be spending good time with each other as they exchange smiles with each other and good food.

Not so long ago, Nargis Fakhri had opened up about her relationship with Uday Chopra to a leading daily saying, ”Uday and I dated for 5 years and he was the most beautiful human I met in India. I never have said this to the press as people told me to keep my relationship quiet, but I regret that because I should have shouted from the mountain tops that I was with such a beautiful soul. The internet and social media is very fake and the people out there won’t know what the truth is. Most often we idolise certain people who are actually bad behind closed doors.”