The team of Nail Polish shares this fun BTS footage, showing that the shoots were not as dark as the film was!

Nail Polish is up on ZEE5 from the first day of the year. It is a courtroom thriller, starring Arjun Rampal, Manav Kaul, Anand Tiwari and Rajit Kapoor in the main roles. The film is written and directed by Bugs Bhargava Krishna. Nail Polish is an intense mystery thriller, with a very dark story. This made us wonder if the atmosphere on its sets was just as grim while shooting. But, this behind-the-scenes video says otherwise!

Arjun Rampal in Nail Polish plays the role of a defence lawyer, who aims to defend the accused, Veer Singh (Manav Kaul), from the charges of multiple murders that are put on him. Amit Kumar (Anand Tiwari) is the prosecutor whose aim is to get Veer Singh convicted. While all the actors fit very well into their roles and share cold shoulders on-screen, little did we know about the blast they had behind-the-scenes?

In this BTS video, we can see them having a laugh in the midst of a courtroom interrogation. The clip also shows the team preparing for different shots. The trailer of Nail Polish opens with a shot of Arjun Rampal immersing his head in water, and we also see a part of how that scene was shot.

Anand Tiwari shares his experience of working with Arjun Rampal. He says, “Arjun had not met us before. But right on the first day of the shoot, he connected so well with us, it felt like we have known him for years. And his instincts as a story-teller are so sharp, it’s amazing to see him work. He is a very open-hearted person.”

Also, Arjun Rampal’s opening scene in the film is his break-up with his girlfriend, where she throws her shoes in anger. The BTS video also shows a part of this scene, and Arjun reveals that the heels of her shoe hurt him on the knee and toes while filming. 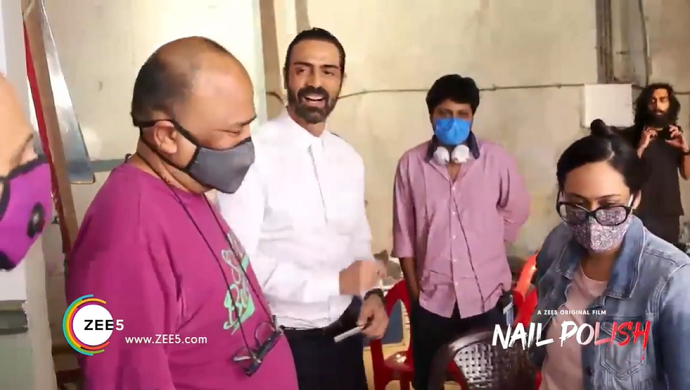 The cast can also be seen playing cricket on the set, where Arjun shows his excellence in batting. One of the BTS scenes at the end shows Manav Kaul playfully kissing Arjun Rampal. Seeing them in such playful moods during the shoot is surely a fun surprise for us after we saw their completely grim avatars in Nail Polish, a dark thriller!

For more stories about the latest films, stay connected to ZEE5.