Mithai: Mithai’s beautiful bond with her beloved Dadai is a joy to watch

Mithai and her beloved dadai Siddheshwar Modak have known each other not for a long time, but their affection for each other is a joy to watch.

Popular TV serial Mithai is winning the hearts of the audience with its sweet yet captivating storyline. The show features Soumitrisha Kundu as Mithai and Adrit Roy as Siddhartha Modak in lead roles. Mithai has struck a very cordial and loving bond with everyone in the Modak household. However, she has especially become very close to Siddhartha’s Dadai, Shiddheshwar Modak, who has taken a liking to Mithai’s jovial and innocent personality. They share a very sweet playful bond that reminds us of the beautiful relationship between a grandfather and a granddaughter.

A pillar of support

Grandfathers always support our unconventional dreams, even when our parents are against them. Dadai is no different. When Mithai expressed her desire of participating in the annual sweet competition, Siddheshwar took up the initiative and spoke to his eldest son in order to get Mithai a place in the competition, which ultimately led to her victory. He, like a true grandfather, stood by Mithai when no one was ready to give her talent a chance.

Cheerleaders of our efforts

Grandparents are always very easy to please. The smallest accomplishments fetch us bundles of compliments and appreciation from them. Dadai also does so when he tastes Mithai‘s Monohora for the first time. He is so overjoyed by the taste of the sweet that he tells her to distribute it among the family members. Well, we have all seen our grandfathers bragging about their grandchildren in front of everyone.

A grandfather and a granddaughter can indeed make for two great friends. They laugh and scold each other when needed but never stop loving the company of one another. Mithai and Dadai are also the same. They always take care of each other, laugh together, and when needed, scold each other. Dadai is yet to exercise his sternness in front of Mithai, but Mithai was seen scolding Dadai when he had too many Pantuas. Well, that is a common sight between grandparents and their grandchildren, isn’t it? 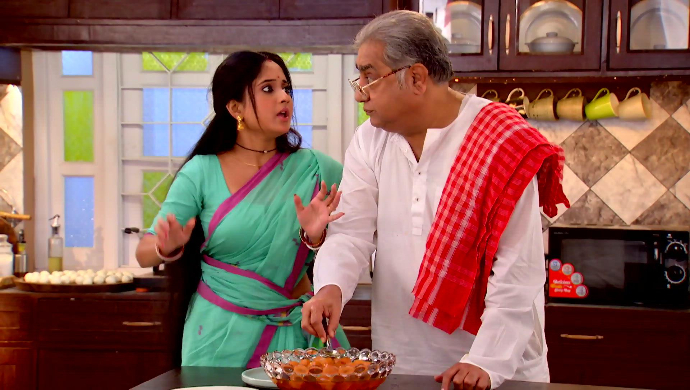 Along with her playful nature, we have seen that Mithai is indeed a responsible woman. Her responsibilities are extended towards Dadai also, as we see her taking care of him with everyday chores. She took him to the doctor after he experienced heartache during Mithai’s wedding. After he was feeling better, she expressed her gratitude towards God and was heard saying that she will always take care of Dadai and will never let him worry about anything. A granddaughter’s care and affection always soothe the ailing and fragile grandparents, isn’t it?

Mithai has always found a true friend and supporter in Dadai and we hope that their relationship remains unaltered and pure as it is even during the hardships of life.

Watch Krishnokoli and other shows only on ZEE5.