Mazhya Navryachi Bayko: With Radhika Finally Knowing Gurunath’s Truth, Guess Who’ll Stand By Her Side To Deal With Gurunath!

She does not know why Gurunath is acting this way but she has confirmed that he is in fact, acting.

While Gurunath is acting like a mad man and trying to make everyone believe so, there are many around him who are tired of his antics and they cannot fully trust his madness either. They think that this could be one of his ploys to hurt Radhika. Shreyas, Maya, Saumitra and Radhika too are on the fence about Gurunath being mental. But when Gurunath drops his facade and reveals to Radhika in his usual arrogant demeanour, Radhika is left stunned.

She does not know why Gurunath is acting this way but she has confirmed that he is in fact, acting. Gurunath is holding gatherings and talking to the press and acting like he is Radhika’s husband and he is stealing the limelight from Radhika. The entire team of Radhika Masale get annoyed when they see that Gurunath has hijacked the interviewers and the reporters are giving him all the attention. But something good comes out of this too! Gurunath’s parents Sarita and Vasantrao watch this new report and leave for the village right away.

They have a strong bond with Radhika and treat her like their own daughter. They do not trust Gurunath to be a good person and do the right thing. They suspect that Gurunath is doing all this drama with an ill-intention in mind and want to stop him before he can do any further damage to Radhika’s work. 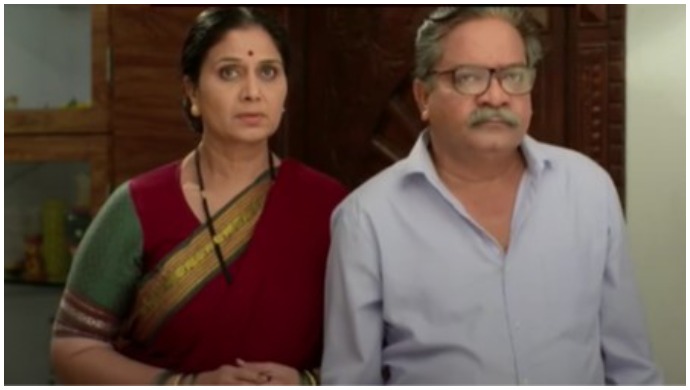 In the coming episode, we will see that when Gurunath returns from the gathering and Radhika bring him inside to talk to him. That is when he will drop his facade and behave badly with Radhika and his parents will witness it. We think that his parents will definitely berate him for going to such lengths to cause problems for Radhika. They might insult him a lot and forcefully take him back to Mumbai. Or they can stand in the way of him and Radhika and keep an eye on him till Radhika’s work in the village is done.

In any case, now that his parents will know the truth about him, we could see that the entire Radhika Masale team will get to know about Gurunath and then they will be wary of him in the future. With the team having to also deal with Gotya Seth, they can come together to make a plan to keep Gurunath away when the war against Gotya Seth begins.