In the next episode of the Zee Marathi show Maza Hoshil Na, we will see how Sai helps Aditya sleep comfortably and covers him with a quilt. Later, she moves away and sleeps in her own room but Aditya imagines her to be sleeping right next to him. He also imagines her coming closer to him and just when they are about to kiss, he wakes up in a tizzy. He sees that the morning sun is out and searches for his watch. He is shocked to see the time and quickly starts to rush home. Sai comes to bid him goodbye and when she touches him, she finds out that he is burning with fever. She tries to stop him but Aditya cycles away.

At home, Bhai Mama and Bandhu Mama try to figure out what Aditya and Sai must be doing. They play a guessing game and say that they must have gone to Marine Drive and must be doing Mumbai Darshan. Bhai Mama suggests that they must be talking about their future. Later, Aditya turns up at home with a fever and they get scared. They ask him to sleep. Aditya receives a call from Joshi sir. Joshi tells him that he has to be present at the office anyhow and he does not want to hear his false fever tale. 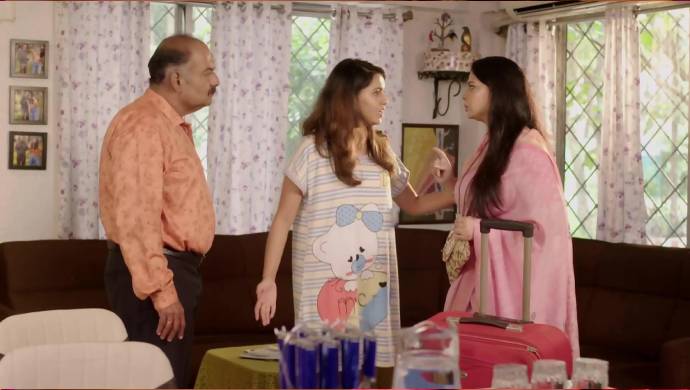 Joshi also sends Aditya a picture of him roaming around with Sai and threatens him. He also tells Aditya that he will lose his job if he does not arrive at the office. Aditya dresses up and leaves for the office. On the other hand, Sai’s parents arrive and look at her suspiciously. They ask her if she met with an accident as the crepe bandage is lying on the sofa. Sai tries to save the situation and lies about the bandage being an accessory.