Manoj Bajpayee, Monica Dogra And Other Celebs Discuss How Their New Shows Will #BreakTheBarriers At ZEE5 Calendar Launch March 2021

ZEE5 is coming with some super-exciting content for the month of March across languages with TV shows like Akhiyan Udeek Diyan, Pahine Na Me Tula and originals like The Married Woman and Qubool Hai 2.0.

ZEE5 is coming with some super-exciting content for the month of March. With the exciting content line-up that we saw in February, the anticipation for March was at a very high level. For the coming month, we will be getting shows and films across multiple languages. From the great content line-up of ZEE5 for March, actors from several shows and films that will be releasing, joined a live stream with ZEE5 to talk about their upcoming content.

On this Women’s Day, ZEE5 is coming up with a great new women-centric show, called The Married Woman, which will explore women #BreakingTheBarriers. Based on a novel, The Married Woman revolves around the story of Aastha, a woman who is stuck in her married life and the burden of expectations that it puts on her, and finds comfort in the arms of another woman.

About the series, Monica Dogra, who plays one of the lead characters, Peeplika, said, “I just watched the first three episodes and the show seems really good. It’s really moving and beautiful. Besides the two main characters, the character of Suhaas blew my mind. Even Sahil is really good. I have never seen a show like The Married Woman. I hope people will also feel the same about the show. It is about the war between the person you truly are and the person that you have to be for the world.”

She also talked about how she shares a lot of common factors with her character, Peeplika. Talking about the common factors, she said, “Peeplika is an artist, she is an activist, she acts with her heart and not her head. She is also outspoken and real. And, she fights for what she believes in. About the difference, I am not nearly as courageous as Peeplika. The character was dynamic and great.”

About Aastha (Ridhi Dogra), Monica said, “At the face value, she is a wife, a professor, and extremely smart. And she was groomed to be a good wife and a good daughter-in-law, the roles that were bestowed upon her.” Monica Dogra also talked about how great it is to be working with ZEE5, and how they get a lot of creative freedom, which allows them to make honest art. She also emphasised how the show is so moving and effective.

After The Married Woman, we will get another murder mystery film, Silence… Can You Hear It? The film will star Manoj Bajpayee, Prachi Desai, and Arjun Mathur. Silence will be an intriguing thriller, revolving around two mysterious murders that take place simultaneously. Silence will be one of the most exciting films releasing in March.

Manoj Bajpayee, the lead of Silence, who plays the character of ACP Avinash Verma in his interaction during live stream said, “Silence is a murder mystery. I’m playing ACP Avinash Verma, who has his own family issues and a back story. He has been given this murder to investigate and Arjun’s character is connected to the mystery. If you look at it from outside, it is a murder mystery but has a lot of layers and conflicts which make it interesting.” He also talked about how the OTT platform has been emerging as the prime content producing platform, with so many actors getting to portray their talent.

Arjun Mathur, who plays the role of a politician, Ravi in Silence, talked about his character, and said, “Ravi is a young politician, happily married, and he just goes through a tragedy. He becomes very integral to the investigation because he is connected to both the murders that take place in the film.” And about Prachi Desai’s character, he said, “She is the only woman in ACP Verma’s investigating team, and is extremely smart.”

A sequel to one of the most loved Marathi TV shows, Agabai Sasubai is releasing, called Agabai Soonbai. It will begin airing on March 15. Another Marathi fiction show, called Pahine Na Me Tula will be premiering from the 1st of March. Actors Girish Oak, Uma Palsula, and Nivedita Saraf talked about the show and its characters.

Actor Uma Palsule, who will be a newcomer in the show Aggabai Soonbai, talked about feeling grateful and honoured to be joining the cast of Aggabai Soonbai. Talking about the show, she said, this is a very different story, and her character will explore the support and relationship that she gets from her mother-in-law.

Actor Aashay Kulkarni, who will be starring in Pahine Na Me Tula, also joined the live session. He shared that this is his second daily soap on Zee Marathi (after he starred in Maza Hoshil Na as a negative character) and is grateful to be working with Zee again. He talked about his character, Aniket, who is an ambitious person, belonging to a middle-class family and wants to work in finance.

Another exciting fiction show that will be premiering on ZEE5 in March, is the Punjabi fiction series, Akhiyan Udeek Diyan. The show will star Parmeet Sethi and Keetika Singh in the leading roles of a couple who fall in love despite their age difference.

Actor Parmeet Sethi joined the live stream and talked about the show. He said, “With this series, I am exploring something new, doing something I’ve never done before. Working in Punjabi is a new experience for me. This show has done wonders in other languages and I am hoping that its Punjabi remake will be successful, too.” 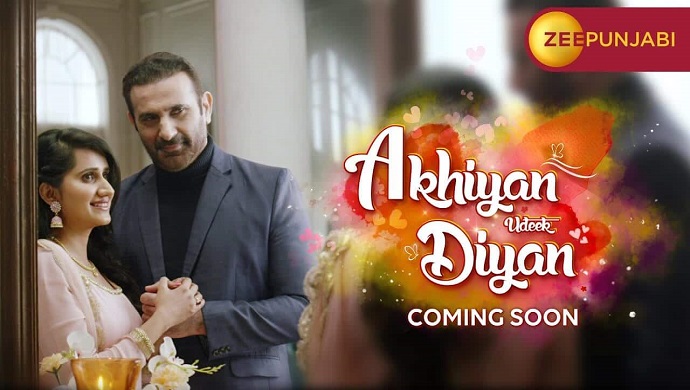 Talking about his role, Parmeet Sethi said, “Vikramjeet is a man who happens to fall in love with a young girl but it happens slowly and gradually, not in an instant. Then the whole story unfolds about the issues of the relationship coming into the picture.”

Keetika Singh, who is playing the second lead, Simrit, also joined the stream. She talked about how grateful she was to be able to do this show with Parmeet Sethi and getting a platform with Zee. She also said how she loved the story which is a very different love story.

The live stream was hosted by Rohit Khilnani and the actors had a blast while chatting with him via a Zoom call. The host discussed these projects with the star cast while also informing us about the other releases that will #BreakTheBarriers in March. With as many as nine languages, ZEE5 is gearing up to bring some amazing projects in the coming month. Along with Kannada and Tamil fiction shows, the month will also see a host of other regional award ceremonies. The live stream went on for approximately 60 min and it was a rather fun discussion that they had.

For more stories and news, stay connected to ZEE5.