Be it a gorgeous dress or a stunning saree, Malaika Arora has always looked oh-so-glamorous in anything and everything that she has ever stepped out in.

Be it a dress or a saree, Malaika Arora has always looked oh-so-glamorous in anything and everything that she has ever stepped out in. In February this year, Malaika Arora was seen wearing a traditional Patola saree at the Dadasaheb Phalke International Film Festival Awards 2020. The diva stunned everyone with her traditional avatar as she looked every bit gorgeous in her traditional handloom sari.

Watch the video here where she receives an award at the function:

Also Read | Malaika Arora spotted at Mumbai airport. Malaika shouted at the media for following her.

At the Dadasaheb Phalke International Film Festival Awards 2020 that took place on February 20, Malaika made heads turn in a handloom saree that was crafted by designer Sangeeta Kilachand which she rounded off with silver jewellery from Apala.

Watch the video here where she receives an award at the function:

The traditional 6-yard patola had illustrations of women and elephants called as Nari Kunjar Bhat pattern in white illustrated all over. Along with it, there were geometric patterns in turquoise blue colour. The handloom saree was also topped off with an intricate marodi embroidery for the border. With the red gorgeous saree, Malaika wore a plain black blouse which was 3/4 sleeved to give a more subtle look.

She paired her outfit with an oxidized choker which she layered with a longer heavy neckpiece. The jewellery was designed by Apala By Sumit. It was also embedded with red and blue beads to match her sarees colours perfectly. She chose to tie her hair back in a bun and wore gajra over it. She completed her look with a bindi, kohled eyes, flushed cheeks and bold red lipstick. Take a closer look at her attire: 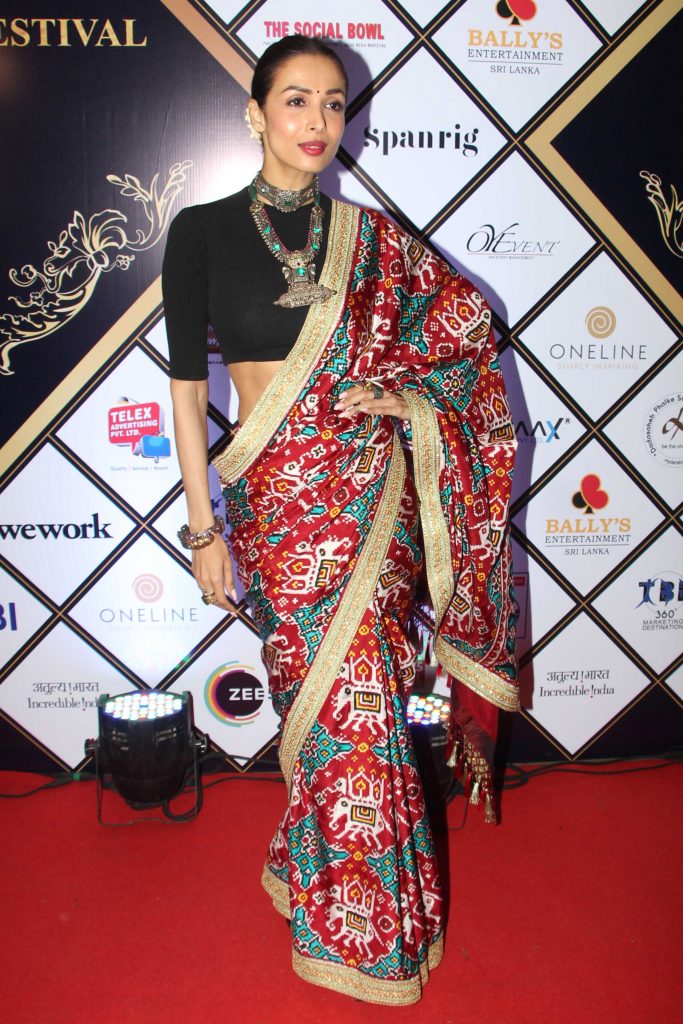 On the work front

Malaika is currently judging the dance reality show called India’s Best Dancer. She was recently tested positive for COVID-19 and was temporarily replaced by Nora Fatehi on the show. But soon after her recovery, Malaika is back to rock on the sets of the show.

Watch the latest entertainment news only on ZEE5.