Loved Paurashpur? Here Are 5 Places In India Where You Can Relive The Similar Old-World Charm

If you are searching for places like Paurashpur in India, we can help you with your search in this #TravelTuesday edition.

With ZEE5’s latest period drama titled Paurashpur, the audience witnessed an epic tale of a kingdom where bigotry, betrayal, and bloodlust dominate the lives of the higher echelons. Starring Shilpa Shinde, Annu Kapoor, Milind Soman, Shaheer Sheikh, Anant V Joshi, Poulomi Das, Sahil Salathia, and Aditya Lal in lead roles, Paurashpur has already created a buzz among the audience. Apart from the riveting storyline, the web series has also been highly appreciated for its ‘old-world’ set making the fans want to visit a place just like Paurashpur.

If you loved Paurushpur, here are five places in India where you can relive that old-world charm

Built by the Chandela dynasty somewhere between 885 AD and 1050 AD, the Khajuraho Monuments are a group of famous Hindu and Jain temples known for their ‘nagara-style’ architecture. As a symbol to mark acceptance and respect between the two religions, these temples were built. People from all over the world come to visit these historic temples. These monuments are also recognized by UNESCO as a World Heritage Site.

Remember the stepwell scene from Paurashpur? Something similar to that is the Baolis of Rajasthan. They look like steep steps that hold a very deep architectural significance in India. Centuries back, wells were constructed in such a way that people had to take steps to reach those wells so as to preserve water in times of drought. It is believed that these stepwells could withstand earthquakes too.

Hampi is a pilgrimage center for the Hindus situated in Karnataka. It is recognized as a world heritage site by UNESCO and is of the most-visited religious sites of India. Historical chronicles suggest that Hampi was a well-developed city where trade would flourish, architecture and people from all over the country would come to visit the temples in Hampi 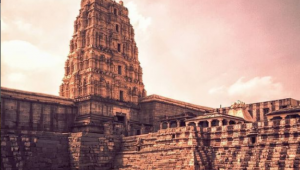 Konark Sun Temple or Konark Surya Mandir was reportedly built in the year 1250 for king Narasimhadeva I of the Eastern Ganga Dynasty. It is believed to be a classic illustration of the Kalinga architecture that is quite famous in Odisha. It is yet another famous pilgrimage site for the Hindus that is recognized as a World Heritage Site by UNESCO.

Ayodhaya is a very old town of India (now a part of Uttar Pradesh) where a part of the epic Ramayana is believed to have taken place. Ramayana suggests that lord Ram was the prince of Ayodhya and spent the first few years of his life there. He even ruled the place for many years after defeating Ravana.