In their latest loungewear photoshoot, Megan Fox and Kourtney Kardashian have just brought their Sexiest avatar in front. However, the allegation of the shoot being a copied version has defiantly dented it in eyes of fans.

Kourtney Kardashian and Megan Fox are known for their glamour avatars. Quite popular for their revealing photoshoots, the two divas are ideal for many brands when it comes to lingerie shoots. Both the stars appeared quite sexy in their new photoshoot for Kourtney’s loungewear line, SKIMS.

However, as soon as the photos from the shoot went live, both Kourtney and Megan were called out with a big allegation.

Though Megan Fox and Kourtney Kardashian have become the talk of the town, not every talk that emerged has been favourable.

Kristen Noel Crawley, the founder of KNC beauty and an ex-friend of Kourtney Kardashian, called out the latter in her Instagram story. In her Instagram story, Kristen has accused Kourtney and Megan of copying the idea of their latest loungewear photoshoot from a shoot that featured models Draya Michele and Tanaya Henry. 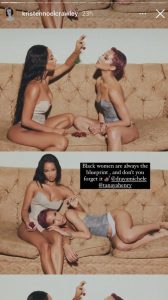 Kristen, in her Instagram story, advised Megan and Kourtney to not forget that it’s the black women who serve as the blueprint for any sexy shoot. 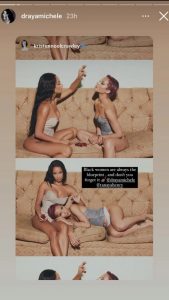 In the copied photoshoot, as it appears to be, Kourtney can be seen offering cherries to Megan as they both appear sizzling in new loungewear. However, when one tries to have a look at the old photoshoot of Draya and Tanaya, the two black models appear in almost the same pose.

While this doesn’t indicate a direct copy as the idea for a sexy cherry shoot can emerge into anyone’s mind, it also can’t be ruled out that the idea isn’t a copied version.

Nonetheless, Kristen Noel Crawley was set with her aim to call out the two for, what she believe is,  a copied photoshoot. However, Megan Fox and Kourtney Kardashian are yet to react to the claims made by Kristen.