Kiara Advani Is All Praises For Her Kabir Singh, Shahid Kapoor For His Jersey Trailer – Seen Yet?

Many celebs, including his co-star Kiara Advani, thought Shahid Kapoor had an outstanding performance in the Jersey trailer. Kiara also sent a meaningful message for her Kabir Singh and his co-star Mrunal Thakur

Jersey, starring Shahid Kapoor, Pankaj Kapur, and Mrunal Thakur, has been making waves in the last 24 hours. The film is slated to be released next month, and the trailer was released. Many celebrities, including his co-star Kiara Advani, saw Kabir Singh nail his performance in the Jersey trailer. Kiara also sent a heartfelt message for Shahid and Mrunal on her Instagram account.

Kiara Advani took to her Instagram account to share the trailer, which included her former Kabir Singh co-star Shahid Kapoor and praised his performance. Not only that, but she stated that his admirers missed him on the big screen. Kiara Advani stated that the screen has missed him and that she is looking forward to seeing him in Jersey. She also remarked that she understands how important this project is to him. Mrunal Thakur and Shahid Kapoor are both stunning on film. Love and best wishes to everyone on the team. Shahid Kapoor was taken aback by his Kabir Singh co-kind star’s message. He, too, answered, writing, Until we meet again, Preeti Ji. 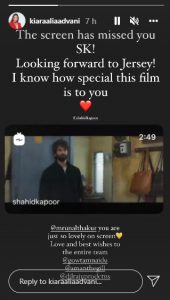 Aside from Kiara Advani, Vicky Kaushal, Bhumi Pednekar, and other celebrities praised Shahid Kapoor’s performance in the Jersey trailer. Jersey, starring Nani, is an official remake of the film. The trailer depicted Shahid’s journey as a cricketer making a comeback for his son, it garnered a lot of positive feedback from Kabir Singh fans. Gowtam Tinnanuri directed it, while Aman Gill and Allu Aravind Productions are behind it. It is scheduled to be released in theatres on December 31, 2021.

Shahid Kapoor was most recently seen in the 2019 movie Kabir Singh, in which he co-starred with Kiara Advani. The film was a remake of the Telugu movie Arjun Reddy, starring Vijay Deverakonda. The actor will next appear in an untitled movie with Raj and DK, as well as another with Ali Abbas Zafar.

(Also Read: Jersey Trailer OUT: Shahid Kapoor And Mrunal Thakur Starrer Is All About 2nd Innings In Life; Years Of Hardwork Pays Off – WATCH)