Katrina Kaif recently called Salman Khan a great human being while wishing him through social media. Have a look at the post with all details related to the superstar’ birthday bash.

Indian superstar Salman Khan recently celebrated his 55th birthday at his private farmhouse in Panvel. The actor also cut a cake with a few media professionals while speaking about his birthday plans this year. He stated that he is not having a huge celebration because everyone has been through a lot of difficulties this year.

Here is a look at the ZEE5 video with all details related to Salman Khan’s birthday bash:

Katrina Kaif posted a dashing picture of her Yuvvraaj co-star while wishing him with a short and sweet message. In the picture posted, Salman Khan is seen posing for the camera at his farmhouse in Panvel, where he also celebrated his 55th birthday. He is wearing a light blue check shirt with a pair of dark blue denims. He is also spotted with well-trimmed and shaped beard which gives him a stylish look.

In the small note added with the picture, Katrina Kaif has mentioned his brand ‘Being Human’, while connecting it to his real-life personality. She has also added a red heart emoticon to express her thoughts clearly. Have a look at the post on Katrina Kaif’s Instagram story. 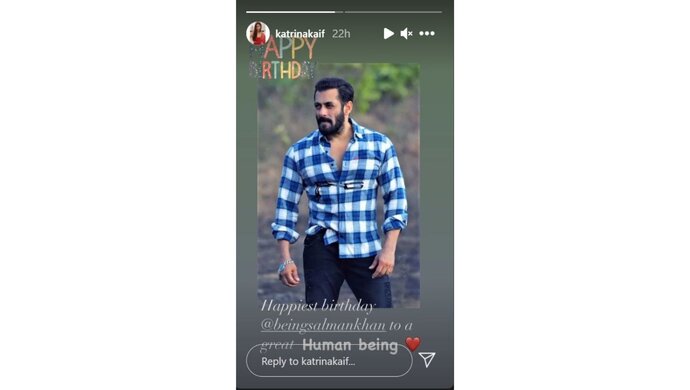 Salman Khan also interacted with the media on the occasion of his birthday, while explaining why he is not having a huge celebration this year. He said that he is only having an intimate get together because he does not feel this is the right time to have a huge bash. He spoke about how much people have suffered this year and hence he has been keeping his birthday low-key as well. Salman Khan also expressed how hopeful he is, about 2021 as the vaccine is under development, which is expected to bring a new ray of hope.