Kartik Aaryan Was Shocked By The Act Of His Fans; Check Out To Know More

Kartik Aaryan was seen taking a selfie with one of his lady fans who inked his date of birth on her chest the actor got so surprised with the act of her, to which he asked that if it was a permanent tattoo? to which she said yes and the actor clicked pictures with him

Kartik Aaryan’s current performance gained tremendous responses from audiences. Today is the birthday of the Pyaar Ka Punchnama actor who is overwhelmed by the overflow of birthday greetings from his fans and admirers. Kartik recently opened up on the love he’s received from his fanbase.

Kartik was meeting the press and fans outside his Mumbai residency as they all were gathered so they can wish the actor. He was seen cutting a cake which the media got for him. While wishing him one of his fans told him about the tattoo. The fans showed him the tattoo and told him that the tattoo was for him. Kartik also questioned her whether the tattoo was permanent or not to which she replied yes. Kartik then thank the lady fan and clicked some selfies with her. 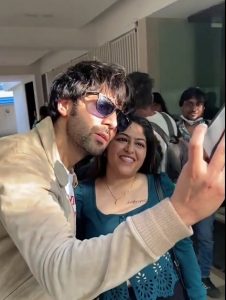 Kartik Aaryan also took his IG handle and clicked a selfie showing his bday cake to his fans and followers and said that it’s his birthday and thanked him for all the love and support he got from his fans. This birthday was his best birthday and felt that today whatever he is it’s just because his fans are the ones who made him a hero, he is nothing without them.

He was also in talks but this time not for his work or movies but for his fitness video which he shared on his IG account. The actor was seen dancing in a very unique style. The actor was happy with the response he got from his followers. Kartik Aaryan also said in one of the interviews, that he is looking forward to doing various kinds of roles.

The actor was last seen in the movie Pati Patni Aur Woh. He will also see in the movie Bhool Bhulaiyaa 2. Currently, he is shooting for the movie Freddy with Katrina Kaif. He was also seen on many digital platforms.