Kareena Kapoor Khan and Amrita Arora who were tested Covid-19 positive were seen having fun at Karisma’s place as she invited them for the dinner at their place. As Kareena posted a picture with BFF Amrita Arora they were heavily trolled by netizens

Kareena Kapoor Khan has always managed to make headlines for one reason or another, whether she is getting spotted somewhere, stepping out in the city, or having a formal lunch with her loved ones. Malaika Arora, Kareena Kapoor Khan, Karisma Kapoor, Amrita Arora are frequently seen together, whether on vacation or for any other reason. They were never shy about flaunting their friendship goals.

As the year draws to a close and the Christmas season approaches, many celebrities are seen spending time with their loved ones. Kareen Kapoor and Amrita Arora are among those who are looking forward to the holidays. There was a recent gathering at Karisma Kapoor’s home. For the uninitiated, the duo was found Covid -19 positive and was reunited at Lolo’s place for dinner after being quarantined for some days. The actresses were so overjoyed that Kareena Kapoor posted an image on her Instagram account with the caption “We are Back.” Amrita wore a lavender short feathered dress in the photo, while Kareena wore a black tube top with beige pants. 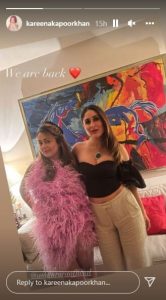 As soon as the photo was shared, the duo was trolled for it, with some even suggesting that Pink Corona would look the same. Additionally, someone commented that even though she is a mother of two, she still thinks she is 16 years old, and she was trolled with the phrase Buddhi Ghodi Laal Lagam as they age shamed her.

After testing positive for COVID-19, both actresses were placed in quarantine for ten days. Kareena wrote several INSTA Stories while in seclusion, expressing her longing for her family. When Kareena and Amrita attended a dinner party hosted by filmmaker Karan Johar, they caught the Novel Coronavirus.

Kareena Kapoor Khan’s next film, Laal Singh Chaddha, is set to be released in April 2022. She’s also working on a sequel to Veere Di Wedding. By co-producing a project directed by Hansal Mehta, the actress will make her debut as a producer.