Taimur and Jeh, Kareena Kapoor Khan’s children, engage in amusing banter as they leave the house without their parents

Saif Ali Khan and Kareena Kapoor Khan welcomed their second child earlier this year, and the family of four has been photographed numerous times in and around Mumbai since then. Saif and Kareena are adoring parents to their children, taking them on vacations and having them photographed around their home.

Kareena Kapoor Khan is a celebrity who makes headlines every time she leaves her home. It doesn’t matter if it’s for her charisma or her sense of style. Taimur Ali Khan and Jehangir Ali Khan, on the other hand, are celebrities in their own right. In fact, neither of these lads should be surprised if they attract extra attention when they leave the house. Tim and Jeh went out recently without their mother Kareena and father Saif Ali Khan, putting the cuties back in the spotlight. 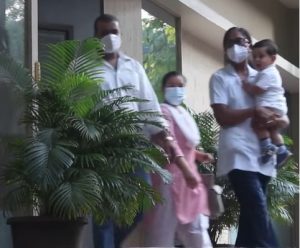 There is no denying that Kareena Kapoor Khan is a diva. But when it comes to her children, Taimur Ali Khan and Jehangir Ali Khan, they are stars in their own right. Paps adore photographing them and never pass up an opportunity to do so when they leave the house. It was only yesterday that Taimur and Jeh were spotted leaving the house without their parents, and today Jeh is spotted in an all-white ensemble leaving the house alone with his nanny, looking
adorable.

Saif Ali Khan and Kareena Kapoor Khan were recently in Pataudi with their sons. We were able to view some breathtaking photographs of them.

On the professional front, Saif Ali Khan recently starred in the film ‘Bunty Aur Babli 2’, allowing fans to see the ‘forever cherished’ cinematic pairing of Saif and Rani Mukerji. Kareena Kapoor Khan’s next film will be Laal Singh Chaddha, in which she will star alongside Aamir Khan.