Karbhari Laybhari’s Priyanka and Sunanda share such a sweet bond and we think they will make for the perfect sunbai-sasubai jodi!

In a recent episode of Karbhari Laybhari, we saw Priyanka and Sunanda having a heartfelt conversation over the phone and it honestly melted our hearts. On the call, Sunanda thanks Priyanka for taking such good care of her son Rajveer to which she replies saying there is no need for Sunanda to thank her as she is just like her daughter and no mother should ever thank her child. The ladies share such a sweet bond and we think they’ll make for the perfect sunbai-sasubai jodi.

Here’s why we think Priyanka and Sunanda will make for the perfect Sunbai and Sasubai jodi:

Priyanka lost her mother at a very young age and has never known what it is like to have a real mother. With whatever little interaction she has had so far with Sunanda, it is clear that she sees a mother figure in her and even calls her ‘aai’. She is already attached to her and loves her.

Unlike typical saas-bahu jodis, Sunanda and Priyanka have each other’s backs and support one another. When Priyanka told her big secret to Sunanda, she kept it to herself and even advised her on what to do. She did not rebuff Priyanka for keeping her identity from Rajveer and understood her reasons for lying. 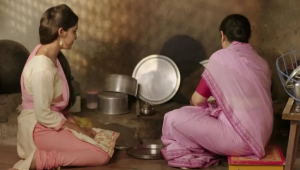 One thing both the ladies have in common is their love for Rajveer. They both immensely love him and will go to any lengths for his happiness. While this is often a cause of tussle between a daughter-in-law and mother-in-law, that seems very unlikely in the case of Priyanka and Sunanda.

Both ladies have similar values when it comes to family and responsibilities. They both love their family a lot and have a never-give-up attitude. This common trait of theirs should definitely go a long way in making their bond even stronger than what it already is.

Sunanda’s late husband and Priyanka’s to-be husband both have a political background and the ladies will have a lot to discuss when it comes to politics and their respective husbands. Priyanka will always have someone she can reach out to whenever she needs advice in this matter.