Karan Johar Drops Hint About His Upcoming Film; We Wonder What The New Venture Is All About

Karan Johar makes us wait for the announcement of his upcoming film. The filmmaker drops hint about his next venture and created hype about the same. Read on to know more

Ever since the theatres are reopened in the state of Maharastra, the filmmakers are announcing their upcoming films. Sooryavanshi, directed by Rohit Shetty, became the fastest film to hit the silver screen after the pandemic. Following the filmmaker, now each one is rushing to announce their projects. One among them is Karan Johar. He recently announced his first-ever action franchise film, Yodha starring Sidharth Malhotra. Now, it’s time for Karan Johar to announce his upcoming film.

The official production page of filmmaker Karan Johar took to its Instagram handle and shared a piece of good news with the fans. They did not raise the curtains fully but dropped hits about the next venture. Sharing the news, the page wrote, “Stay tuned! See you at 8PM. @karanjohar @apoorva1972”.

In the photo shared by the official account of Karan Johar’s production, it was written that stay tuned, announcement at 8 pm. Along with it, they dropped a few emoticons that gave us a hint that the film is based on cricket. They dropped a red heart, a cricket bat and ball emoticon and a sparkle emoji along with the text. In the comment section of the post, the eager fans started to guess if it is any biopic film or anything else that will excite them even more.

Not only this but filmmaker Karan Johar also took to his Instagram story and shared a text that reads as announcing a special film at 8 pm today from a filmmaker who made an extremely special film. He also wrote that one needs to watch his space to know more about the upcoming project. 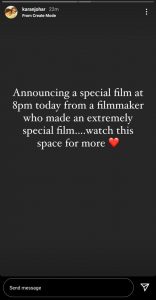 A few days ago, Karan Johar announced his upcoming action film Yodha starring Sidharth Malhotra in the lead role. The film is directed by Sagar Ambre and Pushkar Ojha. The film marks the directorial debut of Sagar and Sidharth will be heeded in a never-before-seen avatar. They haven’t yet revealed their female leads.

Are you excited about the upcoming project by Karan Johar? To know more details of the film, stay tuned.