Kangana Ranaut Posts A Scandalous Photo In Reply To The FIR Filed Against Her; DEETS INSIDE

Kangana Ranaut used her Instagram account to respond to the news of the FIR filed against her by Amarjit Singh Sandhu, a member of the Sri Guru Singh Sabha Gurdwara Committee. The actress was accused after an FIR was registered at Khar police station

Kangana Ranaut recently provoked controversy when she said that India’s independence in 1947 was handed to the country as ‘Bheekh’ or charity by the British. The Panga actress was addressed at a media event the day after receiving the Padma Shri award when she made the divisive comment, India won full independence only in 2014. Kangana Ranaut replied to the news of the FIR filed against her by Amarjit Singh Sandhu, a member of the Sri Guru Singh Sabha Gurdwara Committee, with an Instagram account (SGSSGC). The actress is engaged in a scandal after referring to the farmers’ protest as the Khalistani movement in a Facebook post. The actress posted a provocative photo on Instagram with the caption, Another day, another FIR just in case they come to arrest, the mood at home.

In the midst of all of this, Kangana posted a photo on Instagram of herself wearing a backless black dress with a slit. She also has a drink in her hand and short hair. 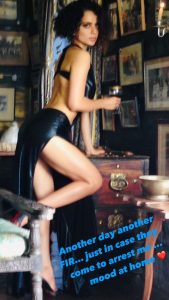 Several politicians have requested an apology from her, as well as a plea to remove her newly bestowed Padma Shri award, claiming that her remarks demean the sacrifice of all freedom warriors who have given their lives for the country. In another case, six senior Congress officials in Assam filed a police complaint against Kangana on Thursday for allegedly uttering disrespectful remarks about Mahatma Gandhi and the liberation cause.

The FIR was filed at Khar police station, and the actress was charged under Section 295-A of the Indian Penal Code (deliberate and malicious conduct intended to offend the emotions of any class by insulting its religion or its beliefs) (IPC). Kangana, according to the complainant, is promoting communal intolerance and attacking one community (Sikhs) in particular, denigrating protesting farmers and freedom warriors.

On the work front, In addition to Thalaivi, she is working on Tejas, Manikarnika Returns The Legend Of Didda, Dhaakad, and a film on Indira Gandhi.