You can download Raai Laxmi and Pankaj Tripathi’s sensational film on ZEE5. Get to know the bold, beautiful and blessed #Julie2.

Julie 2 is a 2017 thriller drama starring Raai Laxmi, Ravi Kishan, Aditya Srivastava and Pankaj Tripathi. A simple aspiring actress makes it big in a male-dominated industry with her debut in Hindi cinema. However, her stardom only leads her to a dark side which has disastrous consequences. The movie, produced by Vijay Nair, is directed and co-produced by Deepak Shivdasani. It is a sequel to the director’s previous film Julie in 2004.

Watch the trailer of Julie 2 here –

The trailer video opens with shots of three things that Bollywood runs on, i.e, lights, camera and action. The voice-over artist reveals the dark truth of the film industry, saying that only the body means business. Julie, essayed by Raai Laxmi is compelled to compromise with her morals in order to become a famous heroine and survive in this brutal fraternity. She is praised for being a powerhouse of talent and a born star but also has to pay the price that it comes at.

Ravi Kishan, who plays the character by the same name Ravi, is seen in a south Indian get up, romancing the actress. Julie gets a big break to play Sumitra Devi, who is the late wife of Ashwini Asthana, played by Pankaj Tripathi. While everybody desires her, Julie looks for love alone. She has dated the bad, the cool, the crazy. But now, she is looking for her soulmate who would love her soul and not lust her body. Suddenly, a conspiracy to attack the high-profile celebrity unveils. Shouldering the responsibility of its investigation, Aditya Srivastava plays ACP Devdutt in the movie. 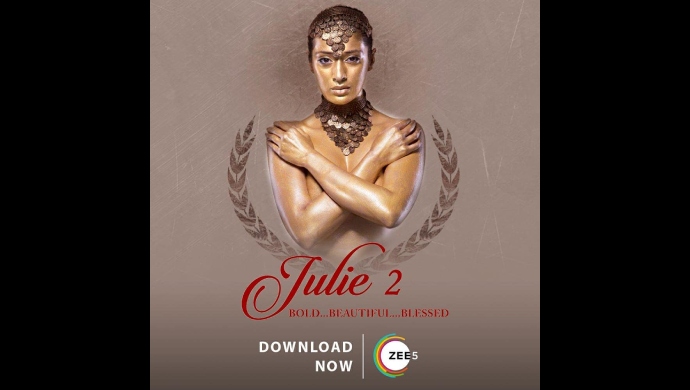 In the second half of the 2 minutes trailer, the rapid shots of unusual events that take place in Julie’s invoke a sense of tension in the viewer. The gun firings and bullets give a sharp edge to the course of occurrences. After going through gruesome experiences in life, the bold, the beautiful and the blessed Julie still has the hope that one day her time will come, not due to luck, but owing to her own talent and self-confidence.

Although the movie is Raai Laxmi’s debut Hindi film, her body of work consists of 50 films down south. Watch the journey of one woman who made a mark in the world of films that is mostly male-dominated. Julie 2 is now streaming on ZEE5!