The B-town actress Kiara Advani who always shares a glimpse of her life whether its related to her work or any sort of things, is quite active and has recently taken her Instagram official account and shared a photo with her fans and followers

Kiara Advani, the Bollywood actress, has been in the news for numerous reasons, for both her personal and professional. She is one of Bollywood’s most fashionable actresses. She is also known as a fitness enthusiast. She is also one of the hard-working actresses in B-town. The Kabir Singh actress has been extremely busy recently filming for her upcoming films. She gained fame after acting the part of Dimple Chemma. Following her celebrity, she is also linked with actor Siddhart Malhotra, with whom she is rumored to have been in a relationship.

Kiara is very active on social media and frequently shares her post on Instagram. She keeps posting some or the other thing on her Instagram account and keeps her fans updated. Recently, Kiara took her IG to handle and shared a picture for her, where she posts an image and questioned her fans about her new look by asking them Yay or Nay as she got a new haircut and captioned it as Fringe. 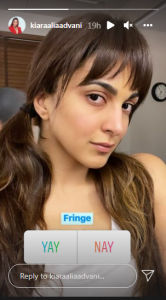 Previously, the actress was in talks when she shared a trailer of her former co-star, Shahid Kapoor, for his new movie Jersey and was seen praising him for his performance. She also said that his fans missed him on the big screen and how important this project is for him.

(Also Read: Kiara Advani Spams The Internet With Her Cuteness As Her Photo With A Kid Goes Viral – See INSIDE)

Recently, Kiara shared some glimpses from her movie Jug Jug Jeeyo starring Varun Dhawan as a lead actor along with Anil Kapoor and Neetu Singh. She also shared a poster of her upcoming film Govinda Mera Naam
with Vicky Kaushal and Bhumi Pednekar which will release on June 10, 2022. She is all set to shoot for her next film with S Shankar RC-15 for which she left for Hyderabad for the shoot.

Meanwhile, talk about Kiara’s upcoming project she will be seen in Bhool Bhulaiyaa 2, alongside Kartik Aaryan. She will also appear alongside Ram Charan in Shankar’s upcoming film.