Last week, Harshavardhan, Aaryavardhan’s younger brother, sacks Anu. However, the latter is thrilled when her boss comes looking for her!

Previously on Jothe Jotheyali, Anu joins Aaryavardhan’s firm while Meera gets promoted to the VP position in the company. Although Meera insults Anu indirectly while introducing her to the team, Aaryavardhan later praises her during a meeting when she successfully completes the difficult task he gives the rest of the team. This makes Meera jealous and she switches the file of the site visit that Aaryavardhan is planning to go to along with Anu.

This results in a huge mix-up causing Aaryavardhan to reach the wrong place and realise the trauma Meera has put him through. However, before learning how miserable the workers are Aaryavardhan in a fit of rage screams at Anu for misplacing the file and giving him the wrong address. This causes Anu to resign from his company at the end of the day as she feels bad for wasting his productive hours.

But Aaryavardhan has other plans and doesn’t let Anu quit so easily. He even thanks her for bringing him to the wrong place failing which he would have never known what was going on behind his back. Once they reach the office, Aaryavardhan screams at Meera for treating the employees so bad and warns everyone to treat all employees with the utmost respect.

Jande soon brings Sampath, Anu’s prospective groom and informs Aaryavardhan that some man is following them. While Aaryavardhan gets upset to know who he is, he later shares a meal with Anu causing her to feel happy.

Let’s see what happened after that, shall we?

1. Anu complains to Aaryavardhan and clarifies the Sampath incident before telling him she loved the fact that he had food with her last night

2. When Aaryavardhan informs her that he loves homemade food, she promises to bring a separate lunchbox for him from tomorrow onwards

3. Meera, who enters his cabin, is annoyed to see him hand over his phone to Anu asking her to answer all his calls for the day

4. Meera then excuses herself and finds Jande to complain to, who tells her that only someone of Aaryavardhan’s stature can eliminate the threat that is Anu

5. At this time, Aaryavardhan’s younger brother Harshavardhan enters the office

6. Thanks to him, Anu is thrown out of the company even before Aaryavardhan knows about it

7. When Anu goes to talk to Meera, she is rebuked and sent away

8. Meanwhile, Jande tries to brainwash Aaryavardhan against his brother but fails in every attempt

9. Anu goes to the temple to see her Gannappa (Lord Ganesha) in order to get some respite from the situation she is in

10. At home, Subbu and Pushpa, who are desperately trying to get through to Anu, find her number switched off and wonder where she is

11. When Aaryavardhan calls up Subbu to ask for Anu, he too is puzzled to learn that she hasn’t reached home

12. He finds her on her way back home and learns about what happened with Harshavardhan

13. He then asks her to come back to work the next day and informs her that he trusts her

14. An excited Anu reciprocates and waits for him to turn back and look at her as he is going back to his car

15. The next day at work, Aaryavardhan shows Anu a way to prove to everyone that she didn’t just get a job back because of him

16. He then gives her a maze drawn on the board and asks her to find the right path

17. After completing the task successfully when Anu is thrilled when she tries to show off her new dress and he compliments her 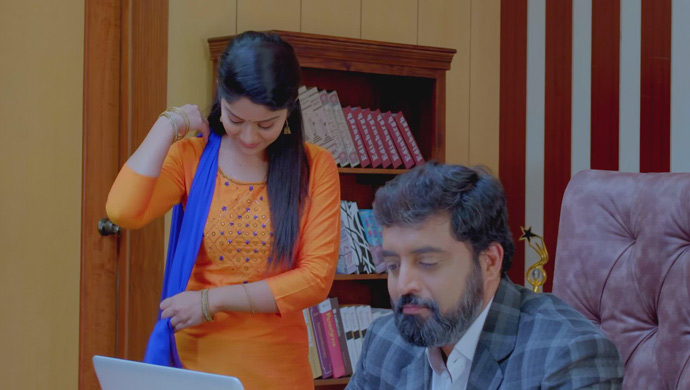 18. Later, Aaryavardhan somehow arranges for a meeting between Anu and Harshavardhan and gives her only six minutes time to prove herself

19. She not only impresses Aaryavardhan but also leaves Harshavardhan speechless

20. Harshavardhan then very reluctantly forgives Anu as he has no choice left

Has he actually forgiven her? Will Harshavardhan team up with Meera to cause trouble to Anu? We’ll know by the next week’s recap, stay tuned.