Bollywood actor John Abraham is known for his action-packed films and some comic ones. Recently, the actor was spotted at the Mumbai airport along with his PA. He was stopped by an airport staff for a procedure. Take a look at his video.

The Batla House actor was flying to Lucknow for a shoot. He flaunted his biceps in a black t-shirt and paired it with black sweatpants. He also wore a plain black cap and a black mask as a precaution for COVID-19. He walked out of his car with his PA when the media managed to capture him. John posed for the camera and showed them a thumbs up.

He was immediately stopped by airport staff to make sure he has installed the Arogya Setu app which has been made mandatory by the Indian government while travelling by air. The star opened the app and showed him and turned back to say ‘bye’ to his driver. He also asked the reporters if they could even see him through the mask, to which they said that it was alright. He then waited in the line and was asked to move ahead towards the gate of the airport.

John was on his way for the shoot of his film Satyamev Jayate 2, which began yesterday. He recently shared the movie’s first look and also revealed the date of release. The actioner, which is directed by Milap Zaveri, is being produced by Nikkhil Advani and Bhushan Kumar. It features John Abraham and Divya Khosla Kumar in lead roles and will open in cinemas in May’21. Divya shared a picture from the first day of their shoot in Lucknow. She mentioned that she had been waiting for too long for it to begin because of the COVID-19 pandemic. Take a look at the picture. 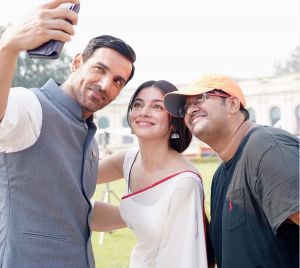 John has a busy year ahead

Also Read | Get gains like John Abraham with his full-body workout!