Jibon Saathi: 5 times Priyam and Sankalpa confessed their love for each other and gave us all butterflies!

Here are some romantic moments between Jibon Saathi’s Sankalpa and Jhelum that are sure to fill you with delight.

Zee Bangla’s popular serial Jibon Saathi stars Diya Basu as Priyam, Sayan Karmakar as Sankalpa and Shrabani Bhunia as Jhelum in the lead roles. Priyam and Salkalpa have had a very rocky beginning to their marriage. Initially, Sankalpa wanted to marry Priyam’s sister Jhelum but Jhelum did not reciprocate his feelings. He was not happy with his marriage with Priyam and thus treated her badly in every instance. But over time, Sankalpa came to love his wife and the couple has often expressed their feelings through their actions. Here are some moments between Sankalpa and Jhelum that gave us all butterflies!

When Priyam and Sankalpa confess their love for each other

Priyam and Sankalpa had to go through many hurdles in order to realise their love for one another. But there have been many times when they stood by each other like a pillar of support. In an episode, Sankalpa is worried about Oishani’s wedding and suspects that there might be someone who is trying to spoil the wedding. Priyam assures him that she will handle it all and will make sure the wedding is completed without any hindrance. Sankalpa praises her for doing everything for the Banerjee family and then he says that he loves Priyam for who she is. Priyam too confesses to have fallen in love with her husband.

Also Read: Jibon Saathi: Here’s why Rik is right about wanting to put Koushani behind the bars

When Priyam addresses Sankalpa as ‘Tumi’

Due to their distant relationship, Priyam has always been wary of Sankalpa and that is why she has always addressed him as ‘aapni’ instead of ‘tumi’ unlike any other couple. But when during an intimate moment Priyam addresses him as ‘tumi’, Sankalpa then insists that she carries on with it in the future. They share a cute moment together as they stare into each other’s eyes and reminisce their moments together.

When Priyam and Sankalpa played Dol together 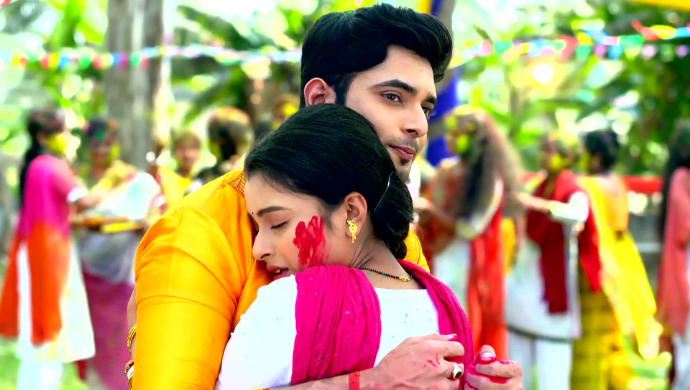 In a recent episode, we see that Priyam gets a phone call from a woman who claims to know Sankalpa and hints at a romantic relationship with him. When Sankalpa returns from work, Priyam questions him about the girl, but he says he does not know anyone like that. Once Priyam believes him, Sankalpa teases her for being jealous and they tell each other how much they love one another.

Also Read: Jibon Saathi: With Koushani’s attempt to kill Oishani, here is what might happen next

Salankara wishes for Sankalpa and Priyam to get married again and thus Jhelum makes all the arrangements to fulfill her wish. While Priyam is busy trying her wedding outfit, Sankalpa enters the room. Priyam becomes very flustered by the situation but Sankalpa insists that he will help her wear the saree. They share some intimate and romantic moments and then Sankalpa picks her up in his arms. These moments definitely had a few of us blushing along with Priyam.