Janhvi Kapoor Shares Goofy-Yet-Memorable Moments From Her Vacation With The Dad; Photos Will Leave You Hooked

Janhvi Kapoor once again shared a breathtaking picture when she took a dip in the pool at night and enjoyed the beautiful view among city lights. Check out the pictures inside

There hasn’t been a time when Janhvi Kapoor hasn’t shared her time off work and her way of enjoying holidays on social media. The actress once again shared a moment from her vacation and we’re so in love with her way of living life to the fullest.

The actress shared an image on her Instagram stories of the moment she took a dip in the pool at night. She shared a blurred image and the night was young with the city lights adding the extra oomph while Janhvi posed happily in her swimsuit.

Check out the picture here: 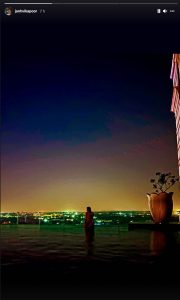 She then shared another goofy picture with her father where she said that she didn’t get the dress code memo.

Check out the picture here:

Prior to this Janhvi shared images from her trek she enjoyed with her friends and built her connection stronger with nature. She shared a carousel of images where she is seen goofing around amid the beauty of nature and sported her bare skin which the audience were all hearts.

Janhvi also recently made headlines for getting her hand inked in memory of Sridevi which was an emotional memory. We did shed a tear for seeing the beautiful love she has for the mother.

(Also Read: Janhvi Kapoor Gets Mom Sridevi’s Handwritten Note Inked On Her Arm; Her Chanting Govinda In This Hilarious Video Will Make You Go ROF)

This statement was inked during her trip with friends. During the trip, Janhvi also got herself inked. She tattooed the words, ‘I love you my labbu’ on her arm. The tattoo appeared to be a nod to her late mother, actor Sridevi. On Sridevi’s third death anniversary this year, Janhvi had shared a note written by her on Instagram. It read, “I love you my labbu. You are the best baby in the world.”

Janhvi was last seen in the horror-comedy Roohi. The film also starred Rajkummar Rao and Varun Sharma. She will star in Good Luck Jerry next. It marks her first collaboration with filmmaker Aanand L Rai, who is producing the film. Good Luck Jerry was shot in Punjab and she wrapped up the filming in March this year. Janhvi also has Takht and Dostana 2 in the pipeline, both under Karan Johar’s Dharma Productions banner.