IN PICS: Madhuri Dixit’s Denim On Denim Ensemble Will Make Your Heart Go Dhak Dhak; Adds A Pop Of Color Via A Handbag

Madhuri Dixit’s denim on denim outfit will make your heart race. you surely won’t be able to miss her red handbag as it adds a pop of color to her look

Madhuri Dixit is an Indian actress and an alluring beauty. She is known for her smile. The actress has an Ada to her which is so unique. The Lajja actress is the definition of grace. Madhuri Dixit has a tremendous fan base.  The actress carries herself with panache and style.

Recently, Madhuri was spotted in an all-denim avatar at the airport. She rocked her outfit by wearing a blue denim jacket with a white tee inside along with a pair of blue jeans. The actress carried a red bag along. Madhuri’s hair was in side-partition and she wore a silver watch on the wrist and completed the look with a black mask which was chained. To complete the look, the actress wore white sneakers. She carried a pair of glares in her hands. Looks like white sneakers are in these days. Madhuri was really looking fabulous. She has always been a stunner. 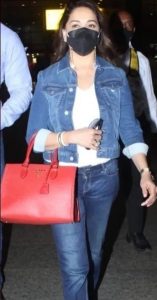 Madhuri Dixit had posted a reel recently where she was seen recreating her iconic hook steps on a different song and it was a sensation on the internet. The actress is a stylish icon and posts a lot of different looks which go in trend always. Madhuri can enhance any look.

Madhuri Dixit has a very close bond with her mom. Recently, the actress was seen enjoying the weekend with her mom while relishing bhel. She had uploaded it to her gram and that picture got a lot of love and admiration from her fans.

The actress is one of a kind and people are eagerly waiting for her return on-screen, as Madhuri has a mesmerizing screen presence.

On the professional front, Madhuri has given many blockbuster films like Dil To Pagal Hai, Devdas, Hum Aapke Hai Koun amongst the others. She has been a judge on a dance reality show earlier.