Our Bollywood actors often keep supporting and boosting each other. One such moment was seen when Tiger Shroff and Hrithik Roshan both applauded each other on Instagram. On 3 September Tiger Shroff took to his Instagram account and posted a jaw-dropping video in which he is seen tapping feet on Sri Lankan song ‘Manike Mage Hithe’. Tiger’s apt dance moves has impressed his fans and even actor Hrithik Roshan seems to be impressed with Tiger’s dance moves. Hrithik in Tiger’s comment section wrote, ‘Superb’.

On the other hand, today when Hrithik Roshan posted a picture of him showing off his well build muscles on Instagram Tiger Shroff was quick to drop a comment. Tiger dropped two emojis in the comment section’. Talking about Tiger’s video post, his post reads as, “This song!,” with an awestruck emoji.’ In the video he is seen tapping feet with his choreographer Paressh Prabhakar Shirodkar. The Baaghi actor often drops videos and pictures while dancing, performing summersaults, various stunts and what not. The actor with perfect shred body looks too way hot while he dances on the Sri Lankan song which is trending on Instagram. 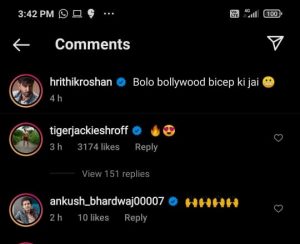 Whereas Hrithik Roshan captioned his post as, ‘Bolo bollywood bicep ki jai’. Hrithik’s hot looks and pumped body is a treat to his fans. His fans couldn’t stop themselves from praising the actor. He posted the picture in the monochrome filter. The actor didn’t stop here, his other pictures are robbing his fans heart. He took to his Instagram handle to share 3 stories and surprised his fans. The photos are from a shoot in which Hrithik Roshan is dressed in a black T-shirt, with Khakhi pants and a shirt. 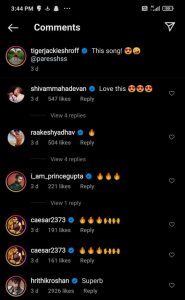 In the first image, Hrithik has penned, “Ready for action.” The second reads as “Yup. Go ahead. Punch me.” The last image is a selfie of the actor in which he is seen making a face for the camera. He wrote in the caption, “My partner. Mr Blue Steel. With my other favourite Mr Grey. Reunited again.” In the caption, Hrithik Roshan is presumably referring to Blue Steel, a modelling facial expression made famous by Ben Stiller in the film Zoolander.