In a dancing reality show, Geeta Maa is undoubtedly the most influential judge. Geeta’s heartstrings are attached to a real-life person, and her photos with that person go viral every day

Geeta Kapur is the name of a Bollywood actress who does not need to be identified. People are awestruck by her incredible choreography. She soared to unprecedented heights in his dancing career. Geeta Kapur gave her the nickname Geeta Maa. She is also seen judging a major dance competition. Her romantic life, on the other hand, has remained empty. Even at the age of 40, Geeta Maa is still single. In the meantime, many of his photos have been shared on social media. She is seen with her spacious boyfriend in this photo. In this case, it is assumed that Geeta Maa is no longer alone, but that someone has come into her life to shower her with affection.

According to the sources, the individual with whom Geeta Kapur is shown in the photographs has been identified. He works as an assistant director and has also acted in a few films. According to reports, the two have been dating for quite some time. The extent to which both are absorbed in each other’s affection is readily obvious in the photographs. 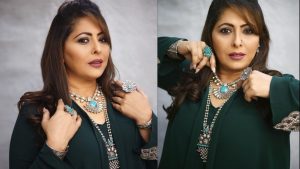 Previously, it was widely assumed that Geeta Maa was not in a relationship. People are shocked by these photographs showing him in such a predicament. His fans, on the other hand, are relieved to see that someone has finally entered Geeta Maa’s life.

At some party or function, Geeta Kapur is frequently seen with her purported boyfriend Rajiv. In a case like this, he was often asked questions about Rajiv, but he always ignored them. In such a case, admirers speculate that, while Geeta Kapur may not be telling the truth about her relationship in public, her increasing closeness in images suggests that she is now in a relationship.